More than 8,600 Russians have sought refuge in the U.S. on the Mexican border in recent months, with nine of 10 using official crossings in San Diego. Many fly from Moscow to Cancun, entering Mexico as tourists, and go to Tijuana, where they pool money to buy cars.

To claim asylum in the U.S., they reach a tiny piece of U.S. soil before inspection booths. They must outsmart U.S. officers who try to block their path.

Maksim Derzhko calls it one of the most terrifying experiences of his life. A longtime opponent of Russian President Vladimir Putin, he flew from Vladivostok to the Mexican border city of Tijuana with his 14-year-daugther and was in a car with seven other Russians. All that separated them from claiming asylum in the United States was a U.S. border officer’s skeptical gaze.

The emotions are "hard to put into words," he says. "It’s fear. The unknown. It’s really hard. We had no choice."

The gamble worked. U.S. authorities assured Derzhko he was safe and surprised him with an apology for the handcuffs. He was released after a day in custody to seek asylum with his daughter, joining thousands of Russians who have recently taken the same route to America. 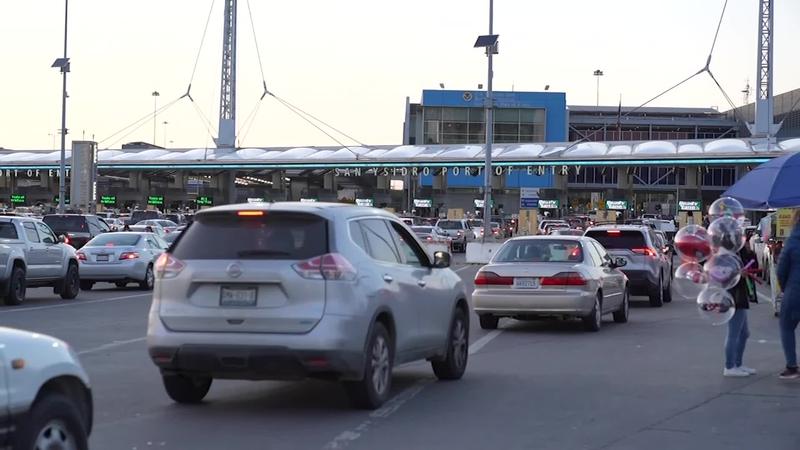 An increasing number of Russians are seeking asylum in the U.S. at the Mexican border.[AP Video]

More than 8,600 Russians have sought refuge in the U.S. on the Mexican border from August through January, with nine of 10 using official crossings in San Diego. Migrants from other former Soviet republics follow the same route in lower numbers, though some authorities anticipate more Ukrainians after Russia invaded their country.

Many fly from Moscow to Cancun, entering Mexico as tourists, and go to Tijuana, where they pool money to squeeze into cars they buy or rent. Adrenaline rushes as cars crawl toward inspectors at San Diego’s San Ysidro border crossing, where about 30,000 cars enter the United States daily.

The border at San Ysidro, under international treaty, is marked by a few rows of yellow reflector bumps, like ones that divide highway lanes. A buffer zone with room for about seven cars a lane separates the bumps from inspection booths, where officers admit or deny entry to the United States.

Migrants just need to reach buffer zones at San Ysidro and other crossings to claim asylum on U.S. soil, but they must outsmart officers who try to block them. At San Ysidro, concrete barriers funnel 24 vehicle lanes to a few officers at the reflector bumps who peer into traffic for loaded cars, motion motorists to flash travel documents and stop suspicious-looking vehicles while they are still on Mexican soil.

Russians swap tips on Telegram, Facebook and other online platforms, including a man who narrated his trip from Moscow’s Red Square to a San Diego hotel room with stops in Cancun and Mexico City.

Many migrants cross illegally in deserts and mountains, but Russians, Ukrainians and others from former Soviet republics favor cars through official crossings.

Derzhko, a Navalny supporter, hesitated to leave until just before his flight to Mexico and says he may eventually return. The United States represents freedom to him.

"America has always been an example for me," he said.