As thousands of people lace up their running shoes this weekend, every one has a reason for heading to the starting line.

Gabe Mills of Kenyon, Minn., is doing it because he says running saved his life.

"You only get to live once, and you don’t want to throw it all away," he said.

The 16-year-old version of him never would have believed he’d sign up for a 26.2-mile race. 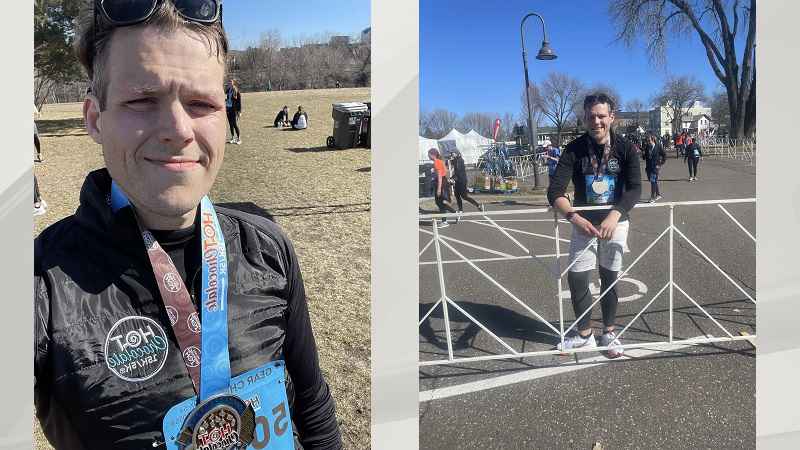 Gabe Mills will run his first marathon this weekend at Grandma's.[Gabe Mills]

It’s so unlikely because in his teens, he weighed 468 lbs. and had gastric bypass surgery.

"I thought it was like a one-all, fix-all, like I would be perfectly fine after that," he remembered.

But it was hard to maintain. The weight came back, along with an opioid addiction that dogged him from 2010-2019.

After years of unhealthy habits, the COVID-19 pandemic jolted him into action.

"During the pandemic and that stuff, we couldn’t really do anything, so I decided I’d go out and do something for myself," Mills said.

A music producer who mostly works from home, he started walking 3-6 miles per day then eventually challenged himself to run some of it to burn more calories.

"I started out with a .10 of a mile and I made it to that and felt pretty good about that," he said.

He gradually increased the mileage, and in October 2020, he ran his first 5k.

He said good running shoes and a fitness tracker helped too. He’s down to about 225 lbs. now. Running brought not just physical changes but mental growth too.

"The confidence that it’s given me is a lot, and it’s really helped me accept myself more," he said, "because it really – it’s not easy to do stuff like this."

His goal is simply to cross the finish line in Canal Park.

"That’s big in itself," he said. "I’m not really out there trying to set personal records. I just want to go out there and finish it."

Mills said he’s proof that anyone can become a runner.

"It’s an acquired taste, but I feel like anyone can start running," he said. "You’ve just got to start slow."