Theft of catalytic converters is rising across the country, but especially in three states: California, Texas, and Minnesota.

"Customers have called up and said, hey my car sounds like a diesel… and I drive a Prius," shared Jordan Matt Thursday afternoon, when we stopped by 4th Street Auto in Duluth to find out how this is affecting residents.

Matt says many customers he’s talked to have been parked somewhere while it’s dark outside when the thieves have struck.

"They’ll go out to parking lots of churches or apartment buildings, and or businesses at night where cars are parked. And they’ll go there with a sawzall and cut — literally after and before the catalytic converter is, buzz it right out, take that precious metal converter, throw it in the car and they’re on their way," shared Matt.

Why are they stealing this specific piece of your car? On average, police say thieves can make up to $300 per converter. 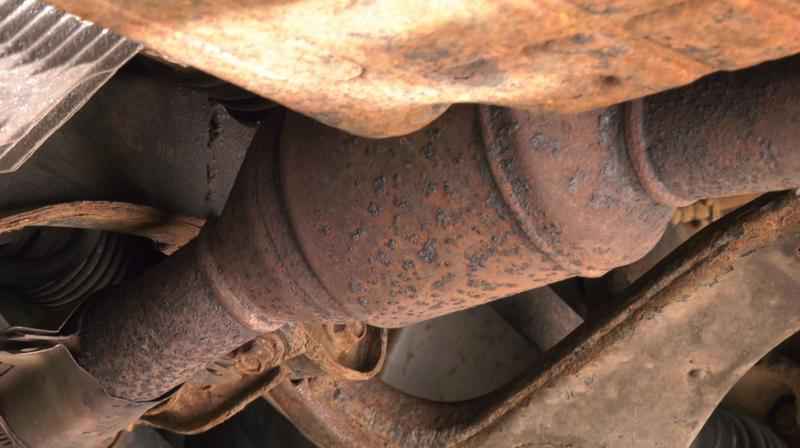 Matt explained that rhodium and platinum are the two highest-cost metals inside the converters. Their value is soaring, now worth more than gold.

"Hopefully the junkyards are able to say, no we’re not accepting this," shares Matt. "But there’s no way of knowing if it was stolen, or if it was from a legit repair."

State Farm says it’s paid out $43 million in claims for catalytic converter theft in just the last year alone. But insurance doesn’t always cover the theft, and you must have full coverage.

How do you know if your converter has been stolen? You’re going to hear it, and your car will sound like you just don’t have a muffler.

"That catalytic converter muffles a lot of that noise that you’re not supposed to be hearing," explained Matt. "It’s supposed to be going through the muffler and the exhaust system, but it’s escaping and that’s why it sounds so noisy."

Now that you know what it sounds like, how can you prevent theft from happening in the first place? Matt explains a few techniques.

"The first line of defense {is} spray painting the converter itself with a high temperature orange paint, or red paint. VHT is Very High Temperature, so 18,000-20,000 degrees so that that paint doesn’t just chip off… You can buy these catalytic converter locks, where they put a big ‘ol metal plate underneath it, and you literally weld it to the body of the car."

Matt also suggests parking in a well-lit area overnight, or by a security camera if you can. There’s also a warning for those who drive bigger vehicles with more ground clearance.

"Pickup trucks are notorious. SUV’s are off the ground further, so there’s more room to get under there. So if you have a low riding car, chances are you’re going to be pretty safe. But if you have an SUV or a pickup truck, those converters are right there and they’re exposed."

If you are interested in installing a metal plate to prevent theft, check in with the folks at 4th Street Auto, or your local body shop for pricing and information.