Duluthians and snowboarding enthusiasts alike gathered in Cascade Park for the Red Bull Heavy Metal competition after it finally returned to the Duluth area with it being last hosted in 2003.

The event not only brought Duluthians to the city but also high profile snowboarders.

Benny Milam, a Minnesota native is very excited for the event to be hosted in a city he used to snowboard in.

Milam says, "I never thought we would be hosting this many snowboarders up in Duluth like it’s insane. It’s a treat to see. I’ve been coming up here since I was a little and we would always ride Spirit [Mountain] so it was always a treat getting to ride at a resort like that."

Jacob Olson, a UMD student, was astounded of how they were able to create extreme slopes for the athletes. He says, "The way it transforms over time and the different events they can do. Yeah especially here in the street like in downtown Duluth is so sick." 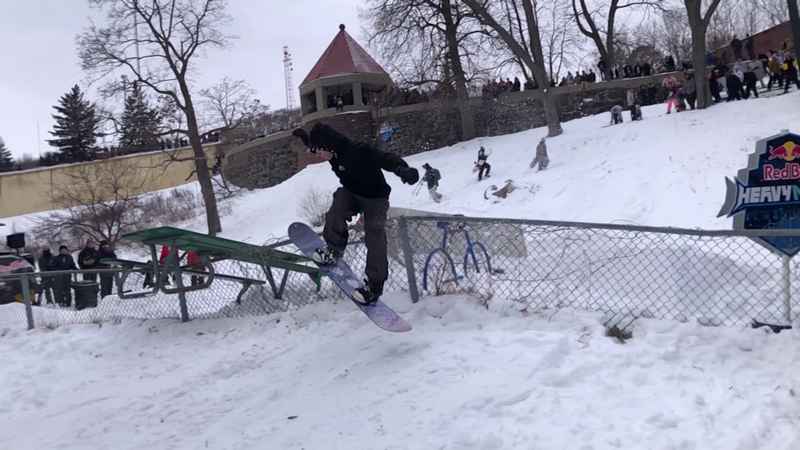 The snowboarding competition was last hosted in Duluth back in 2003.

Duluthians were able to get some very up-front views of the outrageous extreme sport. Especially when boarders jumped out of the tower pavilion onto the snow below.

Benny Milam says, “Well it’s definitely a little nerve racking jumping off a platform like that. But after you do it a couple times you kind of get over that fear. I mean we had a nice soft landing so like if you were to fall from pretty high you’d be all right.”

Minnesota snowboarder Casey Pflipsen also added it’s nice to have some crowd noise in the background. He says, “The crowd helps. Like when you land a trick and the crowd cheers it’s like the coolest feeling ever."

The sport different from others as the snowboarders have the freedom to switch up their moves to impress the judges.

Milam says, “That’s my favorite part about snowboarding is that you are not restricted to just doing plays you can just go out and have a good time and do what you want to do."

The Red Metal Event generating great buzz for the city and for the sport.

"There’s nothing better we could be doing on a Sunday. It brings great exposure to Duluth”, Says spectator Jacob Olson.

Here are the top 3 finishers in the Men’s and Women’s division: