The one-year program helps the student interns transition into work.

"We have high school students who are 18 and up, but then we also have adults from the community who may have been a few years out from high school but never really got that good transition into the work world," Instructor Emily Winker said.

The students spend some time in the morning in class, then they break to work internships. At the end of the day, they come back together to talk through how things went.

"Now we want to work on your speed," Winker told student CJ Wicklund after a day of work, "because if you can get faster and you’re accurate, you’re golden." 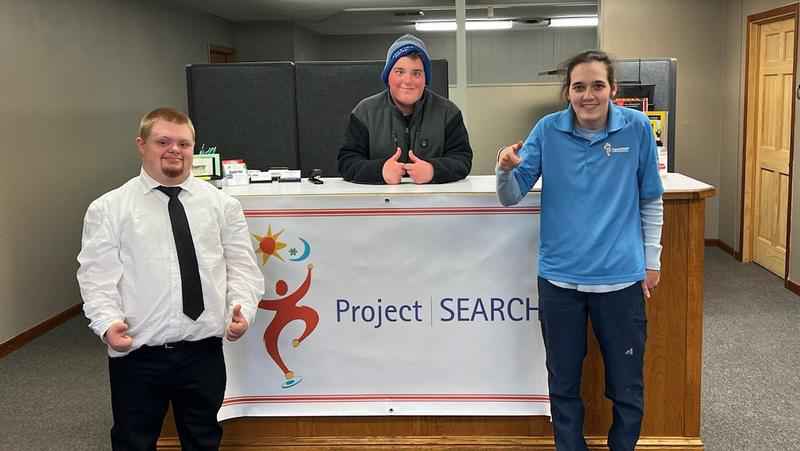 Two of the five are graduating with permanent jobs. Josh Gerding works at Super One, where he bags groceries and wrangles carts. Garrett Lickiss has been hired on at Superior Meats.

Lickiss said he was shocked to get into the Superior SEARCH program.

"Basically, we go through three internships," he described. "My first one was Kwik Trip, where I fried all the chicken. Literally all of it."

The program covers more than employment skills, though. Winker also encourages them to bring healthy snacks. And the Strength Factory, which is right next door to the Project SEARCH classroom, put on boxing classes.

They also got to have some fun. During internships at Ravin Crossbows, they got to try shooting the bows.

Winker said she challenges the students to learn soft skills because she knows they can do it.

"The littlest things like asking for help or taking initiative to talk to their bosses about like, ‘Hey, I need this day off,’ or, ‘I have a question.’ Those are things that would have never even been a thought in the beginning of the year," Winker said.

Liza McCoshen, who has most recently interned at Cooper Elementary, said she learned how to ask for help on the job. Lately, she’s been working on employment applications.

And now, the five graduates are setting goals for the future. Lickiss hopes to one day own a restaurant.

"I just know it would be run by disability people," he said.

Winker encourages businesses not to overlook this potential workforce.

"Even though they might have a disability or a challenge, they can do a whole lot," she said. "And it’s awesome."

Other partners included the Environmental Consulting and Testing Co., the Division of Vocational Rehabilitation, and Embark Supported Employment.

Next year, the program will move into one large business and interns will rotate between departments. Winker hopes to announce their new location soon.