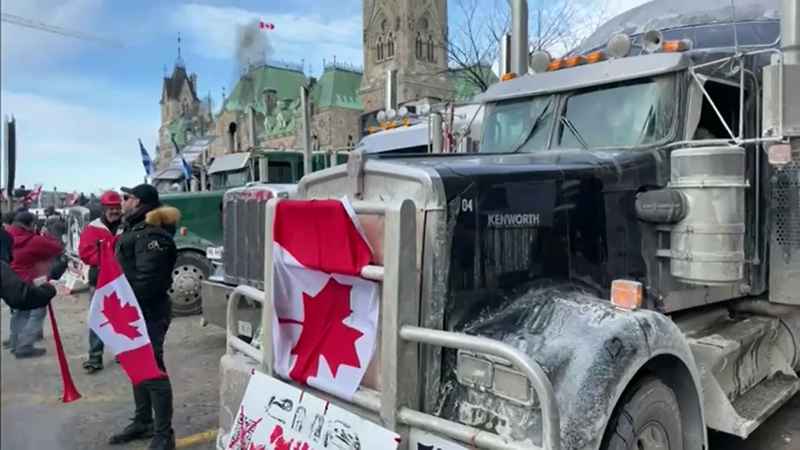 Truckers have been blocking roads around the Canadian Parliament in Ottawa since Jan. 29.[CTV News via AP Video]

Police in Canada’s capital say about 150 extra police officers will be deployed to the areas of Ottawa most affected by the protest against COVID-19 mandates that has been going on for nearly a week.

Police estimate about 250 remain but officials expect it to ramp up again this weekend. They say downtown residents and businesses continue to be severely impacted by harassment, mischief, hate crimes, and noise violations.

But organizers of the "Freedom Convoy" say that they are cooperating with front-line police officers. They say the city is trying to "starve out truckers" by cutting off food, water, and other services.

Furious residents say police have done little to end what some are calling an occupation. Embattled Police Chief Peter Sloly acknowledged Friday "trust has been impacted."

Police said the additional officers will be directed to increase enforcement and charges for crimes such as hate, harassment, assaults, intimidation, and mischief.

Police also plan to use barricades to keep additional vehicles from entering the protest area and are using enhanced intelligence operations to identify people who are funding and supporting the demonstrators who have been blocking roads and making noise since last weekend.

"The demonstrators in this red zone area remain highly organized, well-funded, and extremely committed to resisting efforts to end the demonstration safely. This remains a very volatile and very dangerous demonstration," police said in a Friday morning news release.

Sloly had said Wednesday that police likely can’t end the protests on their own. Prime Minister Justin Trudeau said Thursday that a military response to the protest is “not in the cards right now."