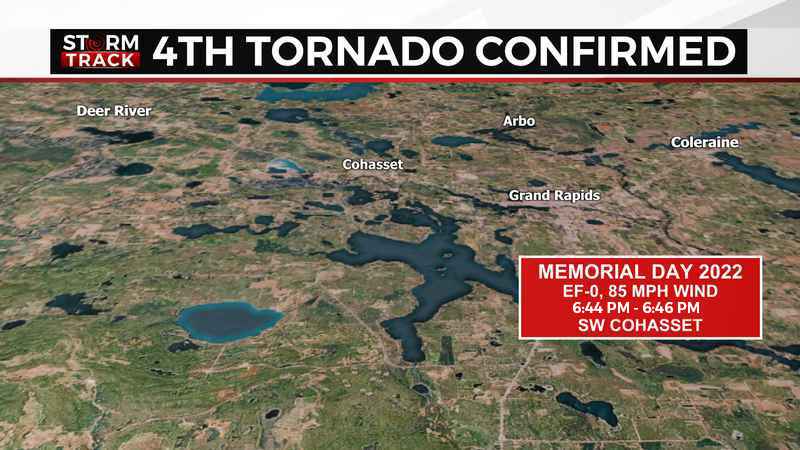 The National Weather Service in Duluth has confirmed a fourth tornado from Memorial Day 2022. [WDIO]

After analyzing drone imagery provided by a storm spotter in Itasca County, the National Weather Service has confirmed that a fourth tornado occurred on Memorial Day. The tornado was an EF-0 two to three miles southwest of Cohasset.

A brief tornado started at 6:44 p.m. on May 30, 2022 near the intersection of County Road 63 and Becker Road. The tornado then tracked northeast, knocking down trees along the way.

This tornado also partially lifted a roof from a two-story home, although no broken windows were reported. Sporadic tree damage continued to the north where the damage path appeared to end a mile from where it began. It was on the ground for two minutes, ending at 6:46 p.m.

The NWS estimates that the tornado was an EF-0 with peak winds of 85 mph. The path was a mile long and 40 yards wide. No fatalities or injuries were reported.

This story has been edited to include the correct timing of the tornado. Initial reports had the tornado touchdown at 5:44 p.m.