She joined the department in June 2002 and retired May 31, 2022. Family, friends, and fellow firefighters filled the station to celebrate her service.

“She never set out to be the first or to make a statement. She just wanted to be a firefighter,” Chief Stuart Matthias said.

She certainly didn’t intend to make history. But when she joined the AFD, she became the city’s first female firefighter.

“I don’t like that they make it about men or women. It is a predominantly male service yet, and it’s all in how you take it. And hopefully that’s changing,” LeBlanc said. “You have to go into it knowing that’s what you want and try to make a difference.” 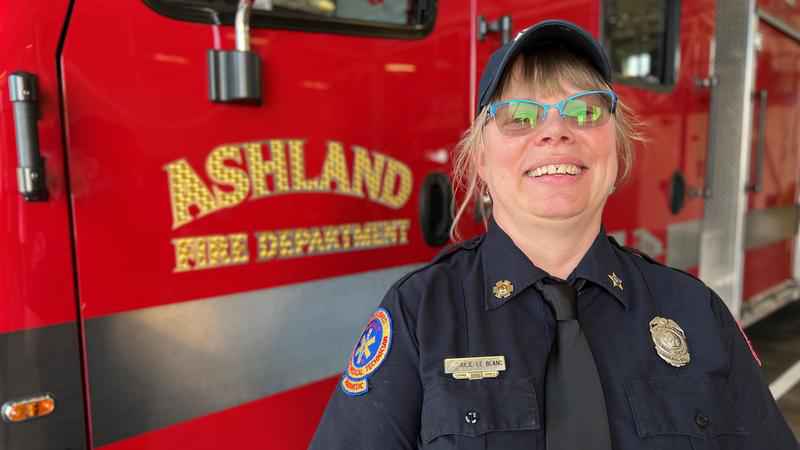 For her, perhaps her proudest accomplishment was starting Ashland’s car seat program in 2003. Chief Matthias estimated that since then, they’ve checked or replaced 2,000 kids’ car seats.

LeBlanc has been working as an acting captain, a motor pump operator, and a community paramedic. She’s also a hazardous materials technician, a wildland firefighter, and an ice rescue specialist.

She opted not to move up the ranks of the department because she felt staying in the rigs would make more of a difference.

“It’s not about the horrible calls and saving somebody,” she said. “It’s just making their traumatic episode a little less traumatic.”

Plus, she never wanted to be stuck in an office.

“I don’t like sitting behind a desk,” she said. “I’m an outdoors action girl.”

She’ll continue her service by going to work for a hospital now to offer in-home care.

And she wants people to know the car seat program will continue. Parents and guardians can make appointments to have a firefighter check their car seat.