New murals are being painted at Gichi Ode’ Akiing Park

Gichi Ode Akiing park is getting its walls redone by indigenous muralists. Taking the dull beige bricks and transforming them with rich indigenous culture and history.

Project Coordinator Moira Villiard says what inspired her to do this is, “broaden people’s perspectives on what indigenous history is in the region. And also like who indigenous people are."

Moira is one of many indigenous painters are spreading their history and culture down at the park. Painting murals to honor the travels of Chief Buffalo all across the many walls of the area. She says there’s, "A mixture of like folklore and contemporary imagery and the story of chief buffalo it’s all like weaved together."

The murals have a lot bright colors which fit to the artistic trends of the people. “There is kind of a beauty in that imperfection. So not everything is going to be perfect or exactly color coordinated, just colorful”, says Silvia Houle who was painting a fish at the time.

The pilot project came about after indigenous folks noticed they weren’t represented in the artwork around Duluth. "I felt such a need for indigenous representation in the art here in Duluth which we really don’t have any that’s supported by the city”, says Villiard. 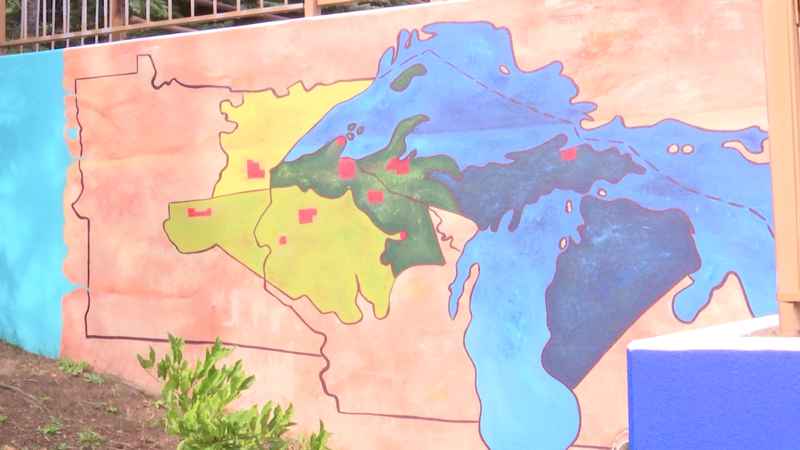 The artwork draws from native culture and features the journey of Chief Buffalo.

One of the leaders of the AIM Support Group Kassie Helgerlson says the group wants to see more representation. She says, “We would like to see more statues more artwork we want plaques going through this park to begin with explaining the history of the area."

And now their murals have opened the doors for more representative pieces to be made. Moira says, “this project is setting the president for future muralists to do projects in the city because now at least there is some sort of system in place. It’s surreal even to describe. I dissociate sometimes when I’m out here because I’m just like we are doing this! It’s finally happening!”