“I was heartbroken,” said abortion rights advocate Stormy Pierce. “I work with PAVSA as an advocate, and it affects a lot of people who are victims of sexual violence. Having our rights taken away, that ability, that autonomy taken away from us is very triggering and it’s a lot.”

“We’re grateful to God for the decision,” said anti-abortion advocate Brett Nelson. “We have looked upon the pro-life cause as a desire to value preborn children and make abortion is unthinkable as slavery, so we’re very grateful for the ending of Roe versus Wade.”.

In support of the Supreme Court decision, a group of anti-abortion advocates gathered at the federal building in Duluth.

“Our Love for the Pre-Born People is what inspired us to start the rally,” said organizer Tom Schaer. “We just were kind of following the Supreme Court ruling on the Dobbs versus Jackson case. We were thankful that it did step forward.” 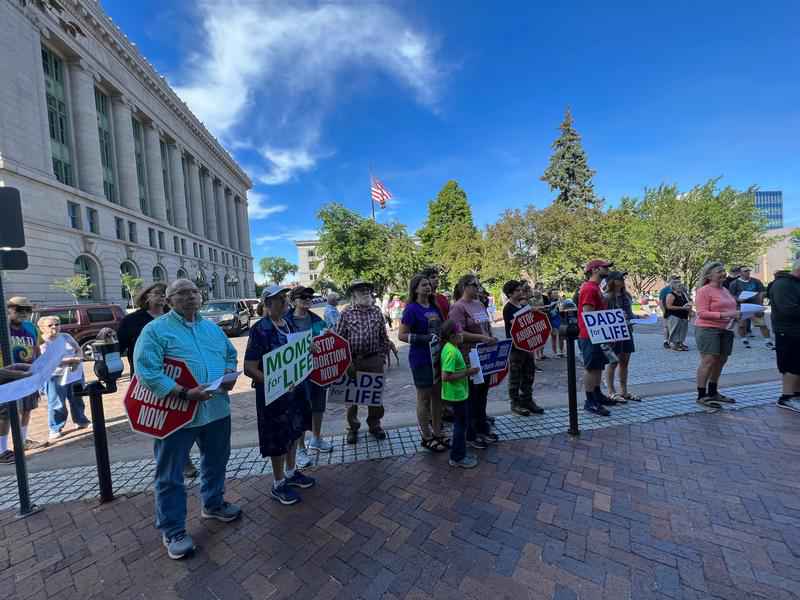 Dozens gathered at the Federal Building in Duluth in support of the Supreme Court's decision to overturn Roe v. Wade.[WDIO/Sabrina]

Those weren’t the only voices being heard.

“I’m here today just to support people who need to get abortions or in the future,” said Pierce. It’s their choice, regardless of religion or the reason. I am in full support of people having their own beliefs and decisions on abortion, but that should not be a law over all of us. That should be an individual decision.”

For both sides, the work is just getting started.

“Protesting now is very important to include and encourage other people who are still angry about this decision to come out and support,” said Pierce. “Just stay strong, everyone. We got this.”

“We’re hoping that states, including the state of Minnesota, might have an opportunity now to choose to look at the Constitution in our state and see if there is, in fact, any right at all for children to be put to death in their mother’s wombs,” said Nelson. “And if there’s not that, we would, as a state, follow in the same pattern.”