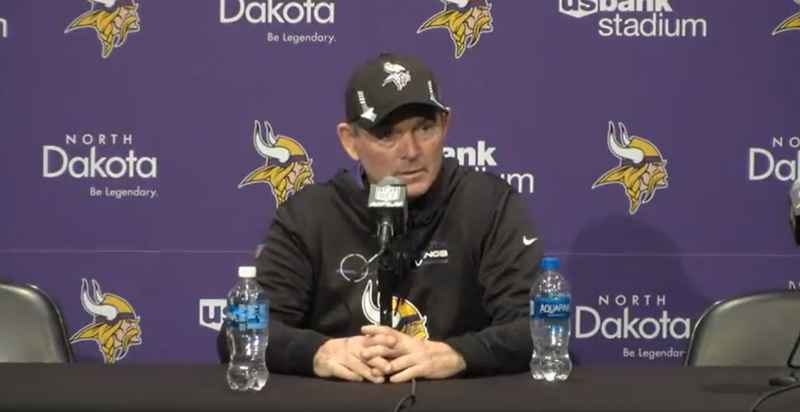 After eight seasons, the Minnesota Vikings have parted ways with coach Mike Zimmer and general manager Rick Spielman. The news comes after the Vikings beat the Chicago Bears during Sunday’s game 31-17. The Vikings finished the season 8-9, and are not advancing to the playoffs.

Zimmer was hired as the ninth head coach in Vikings history in 2014, according to the team. Zimmer went 72-56-1 in eight seasons, plus 2-3 in the playoffs. Spielman was with the team since 2006 and general manager since 2012.

"This morning we met with Rick Spielman and Mike Zimmer to notify them we will be moving in a different direction at the general manager and head coach positions in 2022.

"We appreciate Rick and Mike’s commitment to the team’s on-field success, their passion for making a positive impact in our community and their dedication to players, coaches and staff. While these decisions are not easy, we believe it is time for new leadership to elevate our team so we can consistently contend for championships. We wish both Rick and Mike and their families only the best.

"Our comprehensive search for a new general manager and head coach will begin immediately and will be led internally. We are determined to have sustained success and bring Vikings fans the Super Bowl championships they expect and deserve."

"I am honored to have been a part of the Minnesota Vikings organization and this incredible community for the past 16 years. The people of this state welcomed me and my family and treated us with the utmost respect throughout our tenure. Michelle and I created many special memories with our children here, and we will always consider Minnesota our home.

"Vikings fans, you are some of the most passionate in all of sports. The tremendous game day atmosphere and home field advantage at U.S. Bank Stadium is because of each of you. There is nothing like the emotions we shared together at kickoff each Sunday.

"To the Vikings players, coaches and staff, I sincerely appreciate your tireless efforts to win and your dedication to this community and the fan base. There are so many talented people throughout this organization, and because of that, the Vikings will continue to be a special place in the future.

"Finally, I want to thank Zygi & Mark Wilf and the entire Wilf family for believing in me and consistently providing the resources for us to be successful as a football operations staff. It is not common in the NFL to be in a position for this long, which goes to show how this ownership group believes in stability and supports their leaders.

"While today is emotional, I wish the Minnesota Vikings and Vikings fans nothing but future success."

"I want to thank you for your support over these eight years. I’ve grown to love the people of Minnesota, it has become our home. You have been tremendous to my foundation and helping the kids of Minnesota. We have had great sponsors and met so many great people, including my relationship with Bud Grant and all the people in the offices.

"I have given my heart and soul to this organization and to the players. I have had outstanding assistant coaches who have worked tirelessly. I’m sorry we didn’t get it done.

"I’ll miss coaching the players, some who have been with me for all eight years. I want to thank the players who welcomed me in 2014 and believed in me that I could lead them to be great."