Mayor of Two Harbors says he will not resign

It’s been a back-and-forth battle between the residents of Two Harbors and Mayor Chris Swanson but Wednesday the Mayor announced at a press conference that he will not be resigning.

This all started with the Resign or Recall committee getting 532 signatures on a petition asking the city council for a recall. Some alleging Swanson dealt himself in inappropriate business behaviors while being mayor that involved conflicts of interest or bad ethics.

Yesterday was the last day for Swanson to resign, if that’s what he had chosen to do. But Swanson is choosing to stand his ground.

At Tuesday’s press conference Mayor Swanson said, “So here we are at the present. [A] small group of people, [who] were politically motivated, got their moment in the spotlight, all kinds of accusations, nothing of evidence. Nothing other than it appears bad.”

But the Resign or Recall does believe their allegations were grounded in evidence. Chairman Todd Ronning says, "I think the six items in our certificate of the allegations of malfeasance are irrefutable. And for him to sit there and say that they are all nothing but accusations, and nothing has been proven, is certainly another falsehood.” 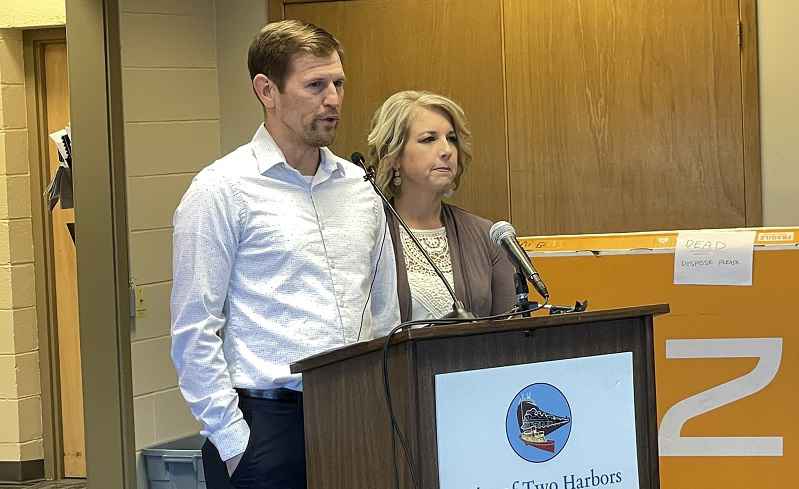 Two Harbors Mayor Chris Swanson said he will not be resigning.[WDIO]

Ronning also reassures the community that the recall is not an attack on Swanson’s character, but rather his practices as Mayor.

He says, “We hoped it wouldn’t have come to this, this isn’t something that any of us want to do or chose to be involved in. But it’s a necessary step for the democracy of our town and the reputation of our community."

The Mayor however, staying strong in his belief saying, “I have done nothing that even closely reaches the level of malfeasance."

The Resign or Recall committee is confident in the special election. They plan on setting up a campaign for when August comes around. “With three years left in the term we were fearful of how much damage could be done to the city’s reputation”, says Ronning.

But Mayor Swanson believes, for a majority of his time, he’s been helping improving the city of Two Harbors.

He says, “The real question for the community of Two Harbors is, ‘does Two Harbors want to continue to move forward and get things done or do they want to stop and go backwards?’”