Looking back at the Beargrease: A recap of the 38th running

There was a buzz at the beginning of the Beargrease. Two dozen mushers had trained and donned their bibs; among them, five former champions would run their teams from Duluth to Grand Portage.

“I was stoked. I always want to race the best of the best anyways,” Ryan Anderson said. “I knew that this team could win if they were managed properly.”

302 miles later, Anderson was the only former champion left in the race, taking the title a fourth time. He tied the record for number of wins held jointly by Nathan Schroeder and Jamie Nelson.

“The dogs did so amazing, there really was not a challenge. There really wasn’t,” he said. “Some people asked me already, ‘How are you feeling? Like are you sore?’ And I’m like, ‘No, I didn’t even have to run up a hill.’ It’s an amazing group of dogs.”

By the time teams reached the final checkpoint, Mineral Center, the top two were all but decided. Anderson had an hour lead on rookie Wade Marrs. The rest of the pack was well behind the two of them. 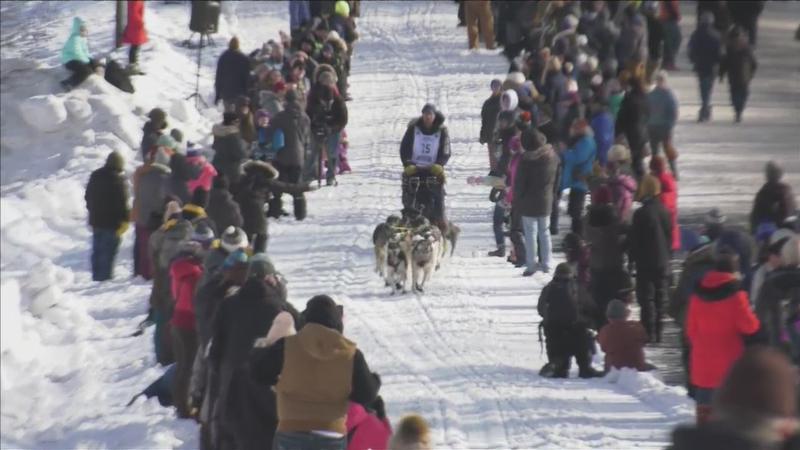 The drama came in the race for third.

“It’s going to be one hell of a finish,” Ero Wallin said on the trail to the Mineral Center checkpoint.

“Ten to five miles to the finish, there’s volunteers standing at the road. And I’m like, ‘Hey, how far ahead is my mom?'” Ero Wallin recounted. “‘Three minutes.’ I was like, OK.”

A second set of volunteers at another road crossing estimated Colleen was only about a minute ahead.

In the end, Colleen never lost her lead. When someone at the finish line shouted that Ero had just crossed Hwy 61 and was closing in on the end of the race, she joked, “Ero who?”

But she knew exactly who, and the two had a tear-jerking hug right after Ero finished.

“The dogs have just amazing spirit. And then you’re out there with your son and the dogs that you both train up, that you take care of and love every day. And it’s just very moving, you know? But very exciting, very fulfilling,” Colleen said. “You know, with everything going on in the world today, it’s just an amazing thing that we can share this and have a lot of fun doing it.”

The last musher crossed the finish line just before midnight Tuesday. Just 10 out of 24 teams made it to Grand Portage.