Humans aren’t the only ones who go to the dentist… Or at least that’s what Lily the lion found out after getting a root canal at the Lake Superior Zoo.

Veterinarians from both the zoo and the Lake County Veterinary clinic dove into the jaws of an almost 300 pound sleeping lion.

They noticed earlier that she had broken her canine tooth and Chief Executive Officer Haley Cope says she’s happy for Lily’s operation. “So we are really glad we can get this root canal and fix up her canine so she can get back to being her normal gregarious self”, says Haley.

The crew was very excited to operate on a lion and while they were all smiles they still had to keep in mind the challenges when working on a big cat.

“Well the most difficult thing about working with a lion is the anesthesia”, says Dr. Louise Beyea. “We need multiple people to move the cat. We need bigger equipment for that animal to breathe. And of course you have the safety aspect. If this animal awakens the level of danger is extreme.” 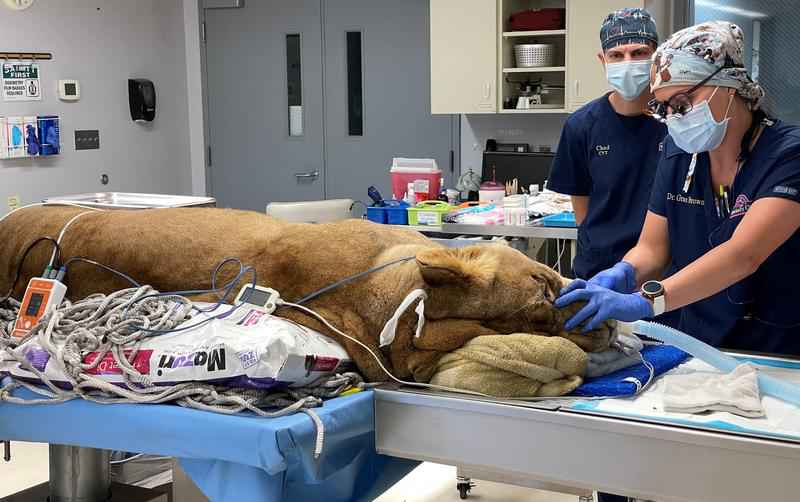 Lily the lion under anesthesia.

And while in surgery, another problem was discovered. Lily had another tooth that needed a root canal. So the crew had to complete the two within the remaining time.

“It took exactly two hours from the start of the surgery to the end and that was for both root canals. A typical root canal for like a dog I might do is about an hour and a half so that’s a fantastic time frame”, says Dr. Grace Brown from the Lake County Veterinary Clinic.

And now Lily the lion is all set. Her teeth will fully recover around the end of August. And in the meantime, she is avoiding and hard food like bones to keep her teeth safe.