There are some new babies at The Lake Superior Zoo. The twin Pygmy Slow Lorises are the first offspring of parents Colby and Giorgio. Zoo officials say the babies were discovered by Nocturnal and Primate Keeper Bethany Wright on March 1. The Zoo formally announced their arrival on Wednesday.

There are only 44 members of the protected species in North America, four of which are in Duluth.

“It’s super exciting because this is our first pair that has ever been born here at the zoo," Wright said. "So we’re super excited to see them and to be a part of the breeding program for them.”

The Lake Superior Zoo plans to hold a poll on their social media pages to get input from the public on what to name the babies.

Wright says Lorises are a type of primate, specifically a simian, which are related to lemurs. 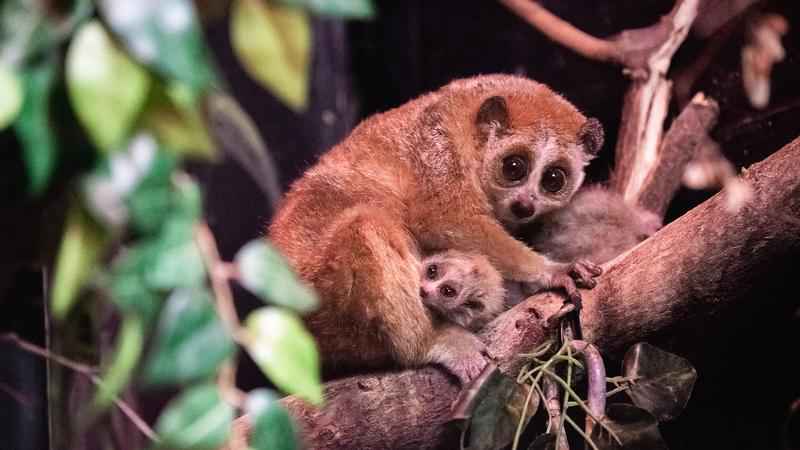 “They’re a super weird group of animals. They don’t always look alike, and they’re also super weird because they are actually venomous, so a bite from them can actually cause some pretty major damage to a human,” Wright said.

Located in the primate area within the nocturnal area, the best time for guests to see the babies is in the mornings when mama Colby is moving around and eating.

A nocturnal, unique species, the Pygmy Slow Loris has needs that provide challenges to their care. Wright says their habitat needs to be dark, and they need to have plenty of places to hide. "They’re also pretty shy," Wright explained. “They need special nest boxes to sleep in, and they need a lot of cover, so we have a lot of fake plants in there for them to go behind if they’re getting a little too overwhelmed with the people."

Zoo officials say mother Colby, 5 and the father Giorgio, 4 were paired together two years ago and brought to Duluth as part of the Species Survival Plan (SSP), a conservation strategy through the Association of Zoos and Aquariums (AZA).

The goal of SSP is the responsible breeding of vulnerable and endangered animals in human care with genetic diversity in mind. Classified as endangered in 2020 by the International Union for Conservation of Nature, the species is seriously threatened by deforestation, hunting for traditional medicines, and trade.