Passed on Friday, the Infrastructure Investment and Jobs Act will put $1.2 trillion towards public works across the U.S.

According to the American Society of Civil Engineers (ASCE), the country as a whole needs to make improvements in many categories, including roads, broadband access, and clean drinking water.

The 2021 Infrastructure Report Card gave the U.S. a C- overall. Roads were among the top concerns, with a D in that category. The report states, “in 2019 over 6,000 pedestrians were killed, marking a 60% increase of pedestrian fatalities from 10 years prior and the highest number since 1988…. the overall fatality rate in rural areas continues to be disproportionately higher than the fatality rate on all other roadways, and it is estimated that roadway design features are likely a contributing factor in approximately one-third of traffic fatalities.”

Minnesota, Wisconsin, and Michigan all received a D+ for their roads. According to the report, MN roads are underfunded by $17.7 billion over the next 20 years, more than one-third of WI roads are in fair or below condition, and 39% of Michigan’s paved roadways are in poor condition. Poor road conditions cause other problems as well. 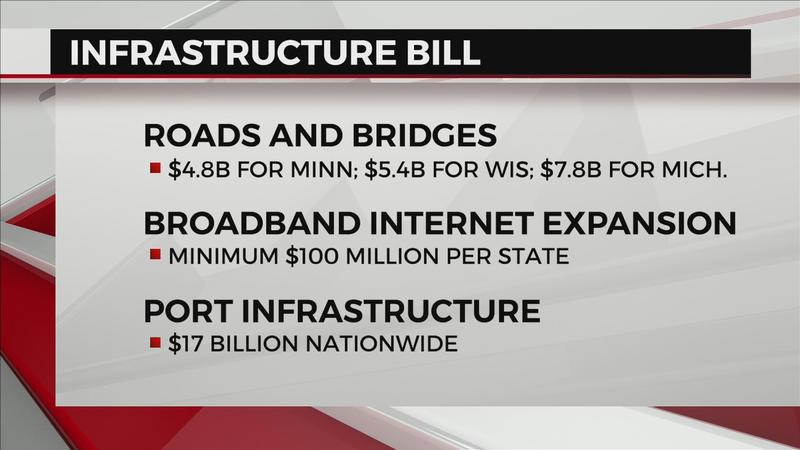 According to the ASCE, there is a water main break in the U.S. every two minutes. Replacing lead pipes and improving water quality is covered by the bill.

In August, the White House stated, "under the Infrastructure Investment and Jobs Act, based on the traditional state revolving fund formula, Minnesota will expect to receive $680 million over five years to improve water infrastructure across
the state and ensure that clean, safe drinking water is a right in all communities."

Wisconsin is expected to receive $841 million for clean drinking water, while $1.3 billion is allocated towards water infrastructure in Michigan.

Broadband internet expansion is another component to the bill, allocating a minimum of $100 million per state. According to the White House, 11.6% of Minnesotans, more than 13.9% of Wisconsin residents, and 8.9% of Michiganders "live in areas where, by one definition, there is no broadband infrastructure that provides minimally acceptable speeds."

The timeline of when states will receive funding once the bill is signed is still unknown.

"Inevitably, the bill comes due on infrastructure as we continue to see our aging systems breaking down and deteriorating," said Brunoehler.