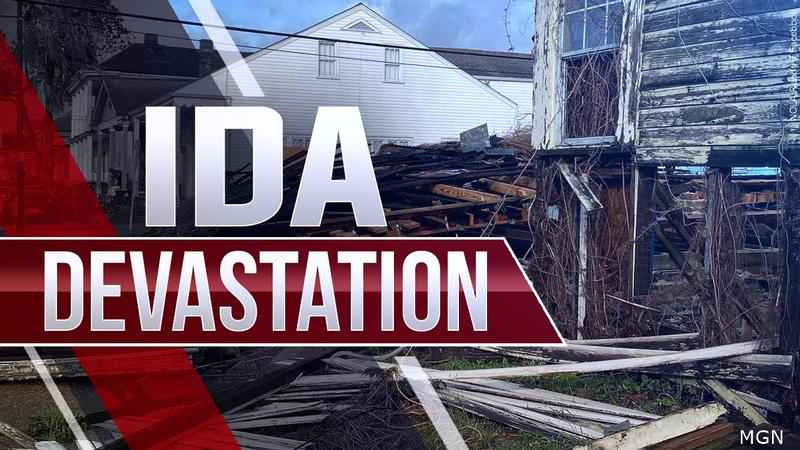 With power likely to be out for weeks, John Pope said he would survive without electricity — with help from neighbors who have a generator — until a scheduled trip out of town next week.

Ehab Meselhe, a professor in Tulane’s engineering school, planned to head out of town once he and his wife finished cleaning up the tree branches and limbs littering their yard. “I have another house in Lafayette,” he said. “Once power is back, we’ll come back.”

A few blocks away, Hank Fanberg stuffed hurricane debris into a garbage back as generators roared on either side of his lightly damaged house. He said neighbors on both sides have generators and they have both already offered, “so we’re going to be in good shape in terms of some electricity.”

Sitting on a screened porch while listening to a battery-operated radio and feeding her one-year-old daughter, Pamela Mitchell wasn’t sure what she would do. She had already spent a hot and frightening night at home while Ida’s winds shrieked. She was thinking about trying to leave. But her 14-year-old daughter, Michelle, was determined to stay, preparing to clean out the refrigerator and put perishables in an ice chest. “We went a week before — with Zeta,” she said, recalling the hurricane that hit the city last fall. “So, we’ll be all right.”

Louisiana Gov. John Bel Edwards’ office says power company crews were doing a damage assessment of its power grid, but that it appeared the damage was “catastrophic.”

Officials were estimating Monday that it could be weeks for full restoration in some areas.

Christina Stephens, a spokesperson for the governor, said search and rescue was underway across many communities in southeast Louisiana, with particular high water problems in Lafitte, LaPlace, the west bank of Jefferson Parish and the Houma/Thibodaux areas.

Stephens said only one death has been confirmed from Ida, but she cautioned that based on the widespread destruction: “We’re going to have many more confirmed fatalities.”

The governor also tweeted that Ida “packed a very powerful punch” and “did everything that was advertised, unfortunately.”

He wrote that levies in hard-hit areas “performed extremely well” for the most part, but that much of the state remains without power, water systems were out and “we have tremendous damage to homes and businesses.”

As of Monday morning, there were more than 888,000 power outages in Louisiana, with outages expected to increase as the storm moves through Mississippi.

More than 2,000 miles of transmission lines were out of service Monday, along with 216 substations, according to the power provider, Entergy.

Entergy said crews were assessing damage to help the company “get a better idea of what we’re dealing with.”

“It would be premature to speculate at this time when power will be restored given the extent of the damage,” the company said.

Entergy has more than 11,000 workers ready to restore service, and expects that number to increase to 20,000, it said. The company is booking hotel rooms and preparing to move mobile sleeping units to house the thousands of workers in areas hard-hit by the storm.

Cantrell says additional details about the death would come from the coroner’s office, but those were not immediately forthcoming.

“This case remains under investigation,” coroner’s spokesman Jason Melancon said when asked in an email about Cantrell’s statement. He would not answer specific questions about whether the coroner’s office is investigating a drowning death or an Ida-related death.

A person also was killed outside Baton Rouge amid the storm when a tree fell on a home, authorities said.

The name of either victim have yet to be released.

Reports of thefts in New Orleans

Police in New Orleans say they have received numerous reports of stealing from stores and other businesses, and made several arrests, in the wake of Hurricane Ida.

“This will not be tolerated,” Police Chief Shaun Ferguson said at a Monday briefing. He specifically described what was occurring as looting, saying, “This is a state felony, and we will be booking you accordingly.”

The police chief added of a storm that has left widespread damage, “This is not the time to take opportunity of our vulnerable population right now, which we all are vulnerable at this point in time.”

President Joe Biden has spoken with officials in states pounded by Hurricane Ida, detailing the federal effort to survey damage and ensure access to electricity, water and cell phone service.

The president said Monday that state officials should contact the White House if they need additional support – even though the effort is being led by FEMA.

“We’ll get you what you need if we can,” Biden said. “The people of Louisiana and Mississippi are resilient. But it’s in moments like these where we can certainly see the power of government to respond to the needs of the people, if government’s prepared and if they respond.”

U.S. health officials Monday declared public health emergencies for Louisiana and Mississippi, seeking to suspend government red tape that may get in the way of providing help to people affected by Hurricane Ida.

The emergency declaration by Health and Human Services Secretary Xavier Becerra puts a pause on certain payment rules and other requirements that could become an unwelcome distraction for hospitals and doctors trying to provide services under stressful conditions.

One example is a requirement that health care professionals be licensed in the state they provide care.

HHS has also staged an incident management team in Dallas to provide coordination of federal health and medical support after Ida passes through the region. Another team is providing support for people needing kidney dialysis.

Evacuated residents urged to stay away

Louisiana Gov. John Bel Edwards’ office says parishes that urged its residents to evacuate are encouraging people to stay away in the immediate aftermath of Hurricane Ida because it remains unsafe to return amid downed power lines, flooded homes, snapped trees and other destruction.

The New Orleans suburb of Jefferson Parish, for example, was estimating it could take at least five days to restore the water system there. That’s according to Edwards spokesperson Christina Stephens.

“The best advice is to stay put where you are” if you evacuated, Stephens said. “People who have evacuated out of the state should stay where they are right now.”

With widespread AT&T cell service outages, many people were frantically trying to reach loved ones and were unsuccessful. But Stephens said people shouldn’t return from their evacuation points to try and check on family and friends. Just because you can’t get through by phone, “that does not necessarily mean that they are not OK,” Stephens said. “We know that much of this is a communications problem.”

Stephens said AT&T hasn’t yet provided the governor’s office with any estimates of when cell service will be restored.

The U.S. Department of Energy says 96% of oil production and 94% of natural gas production in the Gulf of Mexico are shut down due to Ida.

Nearly 300 maned oil platforms and drilling rigs were shut down and evacuated. At least nine oil refineries in the region have also been shuttered, representing 13% of the nation’s total refining capacity.

Several pipelines are also shut down as a precaution.

The service disruptions are not expected to immediately impact the availability of gasoline nationally, due to ample fuel reserves in the system, the department said.

The ports of New Orleans, Baton Rouge, Gramercy, and Morgan City in Louisiana and the Port of Pascagoula, Mississippi are all closed. The Louisiana Offshore Oil Port has also suspended operations.

Authorities were also calculating just how much wind and rain Ida unleashed. Preliminary measurements on Monday showed a high of 15.7 inches of rain from Ida dropped in Slidell, Louisiana, through 9 a.m. local time.

A ship in the port at Port Fourchon measured 172 mph winds, while Venice, Louisiana, recorded a high of 128 mph winds.