"It’s just been a problem," local resident Richard Wright told WDIO News. "So the sooner we get that done, the better off the neighborhood, the safer the neighborhood will be to protect us from flooding.”

The Mission Creek flows under Highway 23 to the St. Louis River. Debris can block the flow of the creek, especially in the spring, causing portions of the Fond du Lac neighborhood to flood.

“It’s going to entail building a new bridge that will have a hydraulic capacity to handle a high storm event and also a debris load,” explained Project Manager Randy Costley on Tuesday. “That stream gets a pretty heavy debris load when we have bad storms, so the bridge will be a little bit higher than it is now, a few feet higher, a little bit longer, and it’ll be a clear opening.

Costley says MnDOT’s plan will also include reconstruction of about nine tenths of a mile on Highway 23. He says the reconstruction will start at the St. Louis River Bridge. 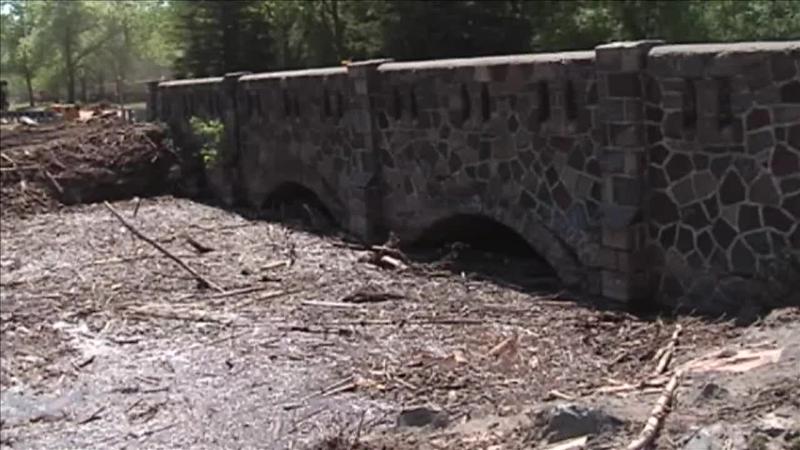 Debris and mud clogg the Mission Creek Bridge in the Fond du Lac neighborhood of Duluth after the Flood of 1012.[WDIO File ]

Flooding near the Mission Creek Bridge has been an issue for years, a problem that MnDOT hoped to resolve when work began in 2017.

“We had a really bad flood in 2012 and that kind of started a process of looking at that bridge and whether it can handle the storm events, and as a result of that 2012 flood, a project was developed that we started in 2017 to replace that bridge,” said Costley. “That is when we found out that our project was impacting a cemetery.”

Work on the bridge project and the relocation of West 4th Street, stopped when crews found Native American remains in June of 2017. Since then, burial recovery has been completed and processed soils were returned to the site. Work to restore the cemetery site will begin this spring, most likely in May.

“We found where the cemetery is and where the state archaeologist has delineated the boundaries of the cemetery, so we’re moving the bridge from where it was in 2017,” Costley explained. “It’s going to move to the south, downstream towards the St. Louis River, quite a number of feet.”

MnDOT is currently working on the public engagement and design phase of the bridge project.

“Everything that we’ve learned since 2017 working with the state archaeologist and Minnesota Indian Affairs Council and Fond du Lac, and we’ve learned a lot about the area,” said Costley. “This project’s going to go through all of the environmental reviews. We’re just at the beginning phase now, all the cultural reviews, all the archeological reviews and that process is starting.”

The project will cost an estimated $4.9 million, using federal funds matched with state IRA funds. MnDOT plans on starting construction in the spring of 2024, completing it by the fall.

While there were concerns about the project’s cost at the public meeting, those who attended will be happy when it is completed.

Traffic is one of the concerns, so is safety,” Wright said “Those are two of the big things, and then the biggest thing was the bridge itself because in it getting to that time of the year now with the water levels, that will increase to on the creek and the bridge, the design of the old bridge created the bridge to clog, and then it created local flooding. It has to be replaced.”