Hermantown and Duluth Denfeld advance to 7A Championship 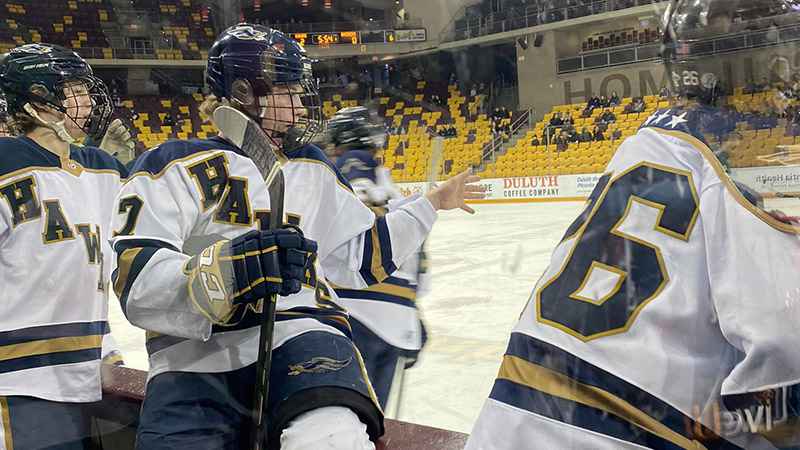 The Hermantown Hawks advance to the Section 7A Championship game with their 6-0 win over the Greenway Raiders.[WDIO]

The Hermantown Hawks advance to the Section 7A Championship game with their 6-0 win over the Greenway Raiders. No. 1 Hermantown got on the board early with a goal from Kade Kohanski in the first period. Dominic Thomas scored on an assist from Matthew Kauppinen to bring the 1st period to 2-0 Hermantown.

Hermantown’s Dallas Vieau, Zam Plante, and Jack Olson each added a goal in the 2nd Period and Gavin Blomdahl scored the only goal in the 3rd.

Greenway beat Proctor to make it to the semifinals and Hermantown took down North Shore.

In game two of the Section 7A Boys’ Semifinal game, the No. 6 Hibbing/Chisholm Bluejackets face off against No. 2 Duluth Denfeld Hunters. The puck dropped just before 8 p.m. in the Amsoil Arena. There was no score after one period of play.

In the 3rd period, Denfeld’s Andy Larson scored within 30 seconds of the puck drop to put the Hunters up 3-0 and that is where the score stayed. Duluth Denfeld advances.

Hibbing/Chisholm knocked off Rock Ridge to make it to the Section Semifinals, and Duluth Denfeld skated past International Falls.

Hermantown and Duluth Denfeld will meet in the Section 7A Championship game on Wednesday, March 2. WDIO will broadcast the game on WDIO-DT starting with a pre-game show at 6:30 p.m., puck drop at 7 p.m. You can also livestream the game on WDIO.com/liveplus.