Flying high in the blue skies for more than fifty years

Tom Sullivan has been flying high over the blues skies for more than fifty years. His interest in aviation started when he was a young college student. "My first flight was in 1969. When a fraternity brother had flown an airplane down to Nassau in the Bahamas." Tom and three of his fraternity brothers went snorkeling. "I got to sit up front and steer with him when I was going over there, and I just absolutely got hooked,” says Sullivan.

The Wright Brothers Master Pilot Award is significant in many ways. Sullivan explains two of the top requirements, "you have to have flown 50 years to be eligible for the award, and the second thing is those 50 years need to be accident and violation-free."

Sullivan shared some of the highlight moments he has experienced in his career. “I got to fly the Hudson Corridor several times. I circled the Statue of Liberty, flew past West point, and I was able to look up at the Twin Towers because they were still up at that time.”

Shannon Hamer, Sullivan’s oldest daughter, described what it felt like watching her father be presented with the award. "Piloting has been one of the things that have given him such great joy. To see him with all of his friends in the room; means a lot to the family. I know it means a lot to him; you could see him tear up a couple of times."

One thing that Sullivan and Ham shared is how safety is a top priority. "My dad is always about safety, and there are things he can do because she has followed the rules. There are just certain things that he won’t do, but yet he knows his skills," said Hamer. 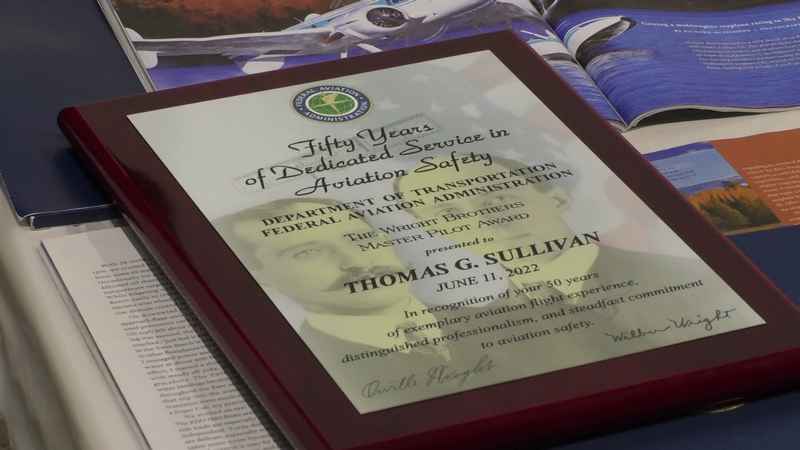 Tom still flies for fun and still instructs. He teaches people how to land and take off on the water and says that is a thrill in itself!