KSTP has contributed to this report 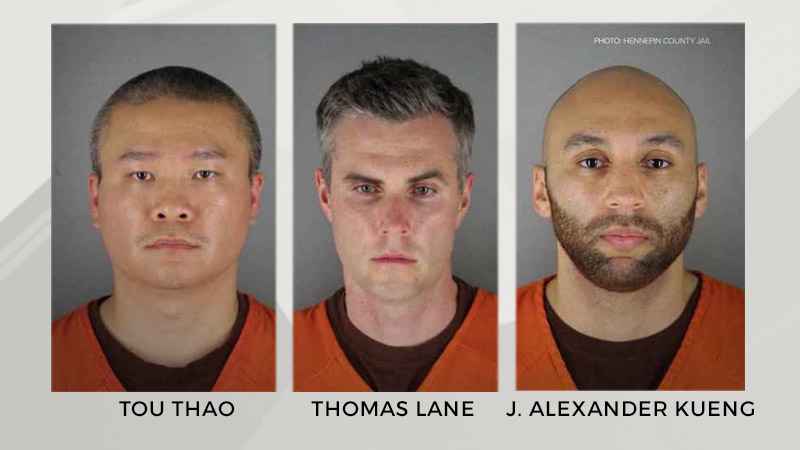 Jurors heard from four witnesses and saw more video from the scene on Tuesday as the prosecution aimed to show how little Thomas Lane, J. Alexander Kueng and Tou Thao did not only for George Floyd, but even for dispatchers and paramedics.

The defense — particularly Lane’s attorney — pushed back on that by highlighting what the officers did and how Floyd resisted. Lane’s attorney noted the officer recommended rolling Floyd on his side, suggested checking for his pulse, did his own check for Floyd’s pulse and then did chest compressions on Floyd in the ambulance.

Hubbard Broadcasting sister-station 5 Eyewitness News is providing updates regarding what is happening in the courtroom. Cameras are not allowed in the courtroom for this trial.

Jurors only got a brief morning break amid testimony from two witnesses Wednesday morning.

Hennepin County Medical Center paramedic Derek Smith spent the majority of the morning on the witness stand, explaining his response to the scene on May 25, 2020.

Prosecutors focused on what little information Smith was given before getting to the scene and asked if it was unusual not to be given more information after his call was upgraded to an emergency.

“Yes, in my opinion, I should be told why there’s a change in status,” Smith said. He later added, “Upon arrival at the scene, I had no information … to me, more information could’ve been provided.”

Smith explained why, after quickly assessing Floyd’s condition at the scene, he opted to load him into the ambulance and move a few blocks away. Smith testified that he told his partner, “I think he’s dead” after checking Floyd’s pupils and pulse, and then decided that, due to the crowd, moving a few blocks away would be best.

While the defense pointed out Smith had said the crowd seemed hostile and “wasn’t safe,” which he confirmed, Smith pointed out for prosecutors that he still started aid right after Floyd was loaded into the ambulance and while his partner drove a few blocks away.

Smith said he had minimal interactions with officers and Lane was really the only one who explained what had happened, although he didn’t specifically say Chauvin had his knee on Floyd’s neck for over nine minutes.

Lane’s attorney highlighted everything Lane did to help, including starting chest compressions on Floyd in the ambulance. Smith agreed Lane’s presence was good, saying, “In my opinion, he was helpful, yes.”

The defense also tried to paint the picture that Floyd could’ve experienced excited delirium, which Smith said can be experienced by subjects who’ve used drugs or other substances and can briefly give them “superhuman strength” but, if untreated, can lead to cardiac arrest and death.

Smith listed some potential signs of excited delirium as a subject excessively sweating, having trouble comprehending and coherently answering, using vulgarities, “being in their own little world,” and agreed that foaming at the mouth could be a sign, although not necessarily. Prosecutors tried to push back on the narrative Floyd may have experienced excited delirium and focused on treatment officers and firefighters could’ve provided.

That line of questioning is expected to continue in the afternoon, as Minneapolis Fire Captain Jeremy Norton was called just before lunch break and started explaining the medical training firefighters have.

Norton also noted firefighters “can get most places in our box within 3 to 4 minutes … and can keep someone alive (until paramedics arrive).”

Court is expected to reconvene at 1:30 p.m. with Norton back on the stand.

Before jurors returned from lunch, Kueng’s attorney asked the judge to declare a mistrial, which Magnuson shot down even before prosecutors had a chance to argue against the motion.

When jurors returned, Norton continued his testimony by explaining his response to the scene on May 25, 2020. He noted, “We had no information from our dispatch at that time, even with the Code 3 update,” and said Thao even asked why the fire crew was there, saying they only needed medics. Norton then told Thao he and his crew were EMS.

When he and his crew finally learned paramedics had taken Floyd a couple blocks away in the ambulance, Norton said they traveled to the ambulance and replaced Lane inside so they could assist the paramedics. However, Floyd was never breathing and never had a pulse while he was there, Norton said.

Genevieve Hansen, a Minneapolis firefighter who was off-duty on the night of May 25, 2020, when she came upon the scene, was the next witness jurors heard from.

She said it was “alarming” when she saw three officers on top of Floyd, and added, “His face looked really swollen and smashed to the ground, he wasn’t moving, he was definitely unconscious … I was immediately concerned.”

Hansen explained how she walked up to the officers, said she was a firefighter and asked to help, specifically for Floyd’s pulse to be checked, but Thao told her to get on the sidewalk. She also testified that she knew it was a time-sensitive situation and grew frustrated with the officers, yelling at them and trying to get them to check Floyd’s pulse.

She also said it was clear there was a lack of communication with dispatch because she saw firefighters arrive and they clearly didn’t know where the patient was or what had happened. She called it unusual for firefighters to even get to a scene after paramedics had taken Floyd away from the scene because firefighters typically get to a scene first.

“I’ve never been to a call that was in that order,” Hansen said.

Judge Magnuson called for an afternoon break at 3:20 p.m. Hansen’s testimony will continue after the break.