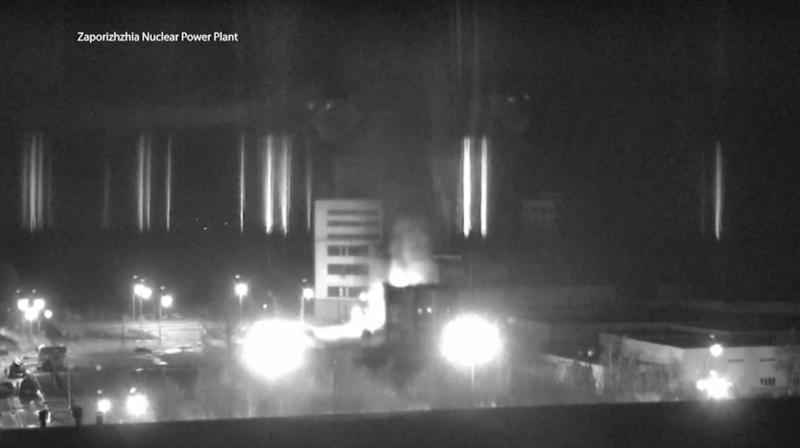 The head of the U.N. nuclear agency says a “projectile” hit a building adjacent to a block of six reactors at Ukraine’s largest nuclear power plant, sparking a fire that didn’t affect its operation, although he stressed there is nothing normal when military forces are in charge of the site.

International Atomic Energy Agency Director-General Rafael Mariano Grossi told an emergency meeting of the U.N. Security Council that the IAEA was informed by Russia a few days ago that its military forces were moving to take control of the Zaporizhzhia plant in the southeastern city of Enerhodar, similar to troops’ seizure last week of Chernobyl, the site of the world’s worst nuclear disaster.

Grossi said the advance of Russian troops toward the perimeter of the nuclear power plant “was met with opposition and some group of civilians attacking the access to the plant.” Early Friday, he said, the IAEA “got information that a projectile had impact (sic) a building adjacent to the block of reactors, six of them.” He did not say who fired the projectile.

Russia’s U.N. ambassador rejected claims that its military forces attacked the plant. He claimed a “Ukrainian sabotage group” set fire to a training facility just outside the plant.

U.N. and Ukrainian officials said no radiation was released.

Grossi said Ukraine’s nuclear installations and facilities are important — four big sites and 15 reactors and associated facilities, plus the site at Chernobyl, which has a giant metal dome covering the destroyed reactor.

The IAEA chief reiterated his readiness to travel to Chernobyl “as soon as practicable” to consult with Ukrainian nuclear authorities and, when necessary, the Russian authorities in charge to ensure that basic principles of safety and security are maintained.