The remaining structure of the Esmond Building in Duluth’s Lincoln Park Craft District, more commonly known as the Seaway Hotel, is covered in ice after a major fire that took more than six hours to extinguish. Several blocks were closed off.

Char Larson noticed the smoke from her home five blocks away. She’s a longtime stylist at Darlene’s Hair Stylists on Superior Street. "You know, when you have that feeling. When I came down to work, I was like, oh my," she said. Still, her clients were able to get there, although a usually busy Monday was slower than normal.

Across the way, JS Print Group was frantically trying to keep their store from flooding. A frozen drain was causing water from the crews to back up. And then the electricity was cut. But it was temporary.

"It looks like the power is back on, so that’s good. It could have been a lot worse. No one got hurt, and we’re now in pretty good shape," Stager said. He said they’ve never been busier, and he’s grateful for employees and the fire crews.

There were no reports of injuries. 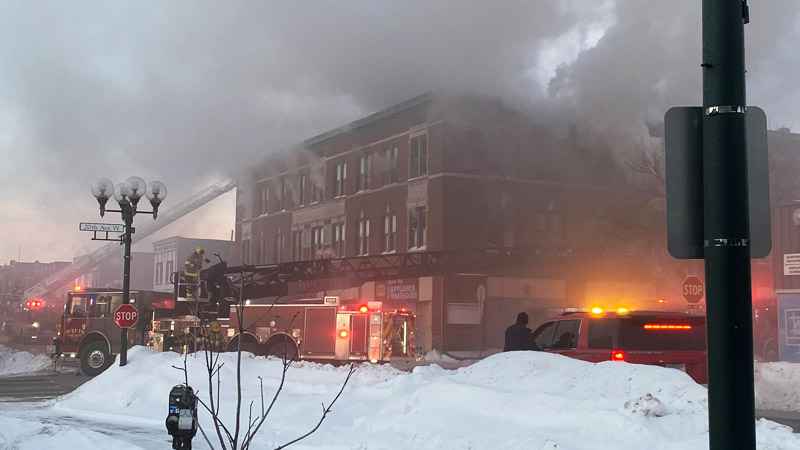 The call came in shortly after 7:30 on Monday morning with a report of heavy fire on the first floor and by 8:04 a.m. the fire extended to the second floor toward the rear of the building. Fire crews initially went inside the building but were pulled due to heavy fire and unsafe conditions, with the response moved to a defensive strategy.

At 2 p.m., the department reported that the main fire was out but that crews were still on scene to put out hot spots.

Power was cut off to some homes and businesses in the area for several hours, but Minnesota Power said service was fully restored by mid-afternoon.

Some residents and workers in adjacent buildings, including residents above apartments in Curly’s Bar, were evacuated as a precautionary measure. Residents were asked to avoid the area for safety concerns.

There was no immediate word on the cause of the fire. A fire at the building last month was ruled accidental, caused by a person who was homeless who was in the building.

The building, owned by the Duluth Housing and Redevelopment Authority, was condemned and slated for demolition after another building was constructed to house the Esmond’s former residents.