February 2022 in review: Below average temps and above average snow

February 2022 shaped up to be both cold and snowy for Duluth. The mean average temperature for the month was 5.9° which fell 9.5° behind normal. Duluth’s total snow for the month was 18.8” which was 3.7” above normal.

Among the other climate stations in the Northland, Ashland was the warmest in February with a mean average temp of 9.6°. International Falls was the coldest at -1.3°. This ranked as the 7th coldest February on record in International Falls. Hibbing set a new record for the coldest February with a mean average temperature of -0.1°. Hibbing’s records go back to 1963.

February has brought Duluth’s season snowfall to a total of 68.1”. This brings us right on track with the normal season total through February of 67.5”.

As the start of meteorological spring, March is a turning point climatologically. The normal mean average temperature for the month is 27.0°, which is a full twenty degrees above what was observed in February. Normal total snowfall for March is 12.8”.

The WDIO Storm Track Weather team is anticipating a cool and snowy March with the mean temperature leaning below normal and snowfall leaning above normal. 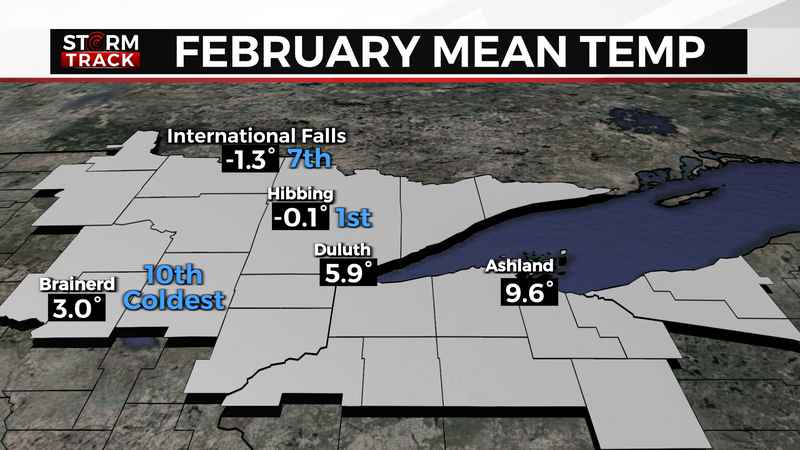