Did you wake up on Tuesday thinking your home was on fire? Heavy wildfire smoke resulted in unhealthy air quality for a large portion of the Arrowhead of Minnesota. The Twin Ports area was not included in a alert issued by the Minnesota Pollution Control Agency, however many residents reported the smell of smoke.

WDIO Storm Track Meteorologist Brandon Weathers was tracking the smoke plume from the fires Tuesday morning. You could easily see the smoke in a foreboding sunrise of brilliant pinks and oranges on the WDIO TowerCam. This points to poor air quality.

A Red Air Quality Index indicates unhealthy conditions for all. It means everyone should limit outdoor activities, and sensitive groups should remain indoors.

This level of Air Quality was observed in Southern St. Louis County on Tuesday morning, but people with breathing issues, taking their cue from an Air Quality Alert issued by the MPCA were surprised to see it was only in effect to the North.

WDIO News received a number of phone calls and emails regarding the smoke. One viewer said, "I went outside for a few seconds early morning and it just reeked of fire smoke. How come there is no air quality alert out right now? I have asthma and in no way will I be outside today." 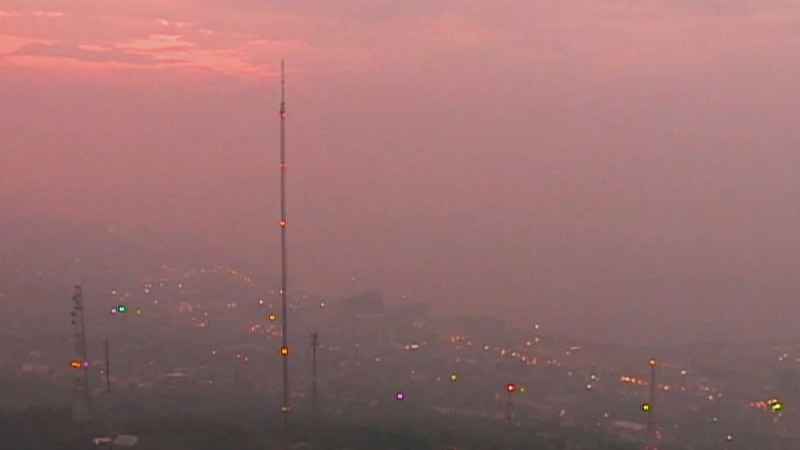 View from the WDIO TowerCam on August 24.[WDIO]

So why was it so smoky in the Twin Ports? The AQI is a measure of fine particles based on 24-hour average concentration. The measurements can be slow to respond to quick changes.

In Minnesota, the air quality is monitored by the Pollution Control Agency. In Wisconsin, the Department of Natural Resources makes the determination. Observations are limited to a few air quality monitoring locations, so they may not reflect highly localized air quality events such as fires. Monitoring sensors in Northeast Minnesota are in Grand Portage, Ely, Virginia, and Duluth.

For Northwest Wisconsin, the only sensor is in the town of Odanah in Ashland County.

This is why areas around the Twin Ports experienced unhealthy air conditions on Tuesday morning, before an official alert was issued. Southern St. Louis and Carlton County were added to the Air Quality Alert around 11 a.m.