With no fans allowed at the 2020 Tokyo Olympics, it was up to the voices of Team USA to bring that excitement to the living rooms of people across the world. One of those voices was that of Duluth native Kara Goucher.

"I auditioned and got the job. So I called a couple small meets as a warm up, and then the U.S. Olympic Trials and then, after that, Tokyo," said Goucher. "This was my first time doing all this."

However this wasn’t her first time around an Olympic track. In the 2008 Beijing Olympic games, she placed 8th and 9th in her events. Then, at the 2012 London Olympics, she finished 10th in the marathon.

Almost a decade later, Team USA called her back to lend her talents as a color commentator for long distance events in Tokyo.

"I never won an Olympic medal, but I know what it’s like to feel the pressure, to feel the expectation that you’re going to [win]," Goucher explained. "To go through the call room, all the things that go into being at the Olympic games, I felt like I had some good insight." 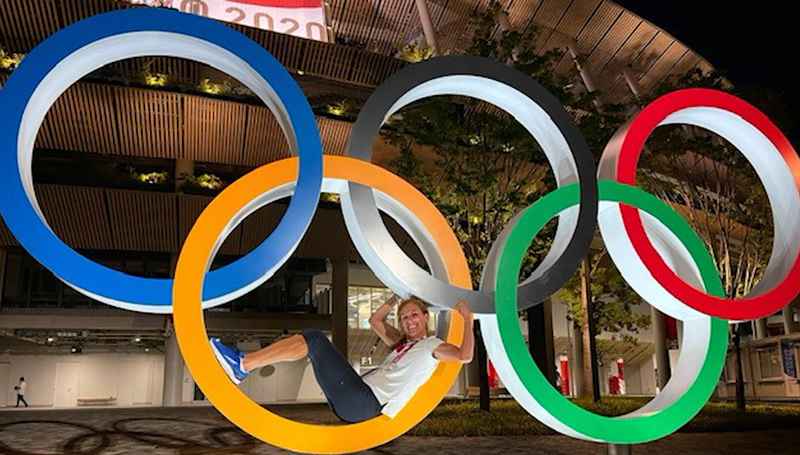 Kara Goucher spent two weeks in Tokyo as a color commentator for Team USA during the 2020 Olympic games.[Kara Goucher]

Goucher could be heard back home in Duluth, and around the world, calling major moments, including when Molly Seidel won bronze for USA’s third-ever marathon medal. She also commentated on 2018 Minnesota Mile victor Josh Kerr’s bronze medal finish in the 1500 meter for the United Kingdom.

"My favorite part was just having a front row to watching these athletes, and to get to help try to express what they were going through. I mean, every single final that I called was exhilarating and exciting."

While she was only calling races for a couple hours a day, she spent the rest of her time awake studying.

"It’s kind of like cramming for a final," Goucher laughed. "You learn all this stuff, and then you kind of like dump it out and have to focus on a whole new field."

Isolated in her hotel or at the stadium, the experience was unique but fantastic.

Upon wrapping up the men’s marathon on Sunday however, she was glad to take off for home. "The second Olympics I ran I got to come through Duluth and run Grandma’s Half as my final preparation race, so Duluth is so important to me."

That’s when Goucher set the Garry Bjorklund Half Marathon course record with a time of 1:09:46.

She said there are talks about making her color commenting gig a long term one with Team USA.