Creating memories while running in marathons

Good weather, the crowd cheering runners on, and the energy was good for this year’s marathon. People gathered in Bayfront Festival Park to relax post-run and hang out with other runners, family, and friends to enjoy some live music, food, and drinks.

"I did the full marathon last year when I was pregnant, says Tiffany Calhoun. It’s beautiful, and the atmosphere is great. We had our four-year-old daughter do the whipper snap races yesterday, and it was just fun to have our whole family be involved in it."

Running pregnant would seems pretty difficult, but Calhoun explains it a little different. "It was actually a lot of fun, I was a little bit worried about it, but I kind of sat aside my expectations and just decided that I was going to have fun on that day and just enjoy the crowd."

The marathon was special this year for a father-daughter duo. They had a sign made to share the special moment with everyone at the event. “We did things like that before where we did challenges and things, like that, and hard things and go through with it, said Dad, Kevin of Minnesota. We kind of joke; because it says the first year, and we do not know if it is going to be the first or the last or first of many.” Daughter, Sam, said, "This is kind of for my first half marathon. For me, there is no other better person I do not think I could run this with, so that is why I ran it.”

From one race to another one in 2 weeks is WHAT a group of friends did. "We have a running friend who wants to do every fifty states. She hadn’t done Wyoming, Grand Tetons. How can you go wrong? We decided we’ll do a 5k and a half in Grand Tetons Time called the Moose Double; then we decided to do grandmas, which is a 5k and a half," shared Jody Grebinonski. 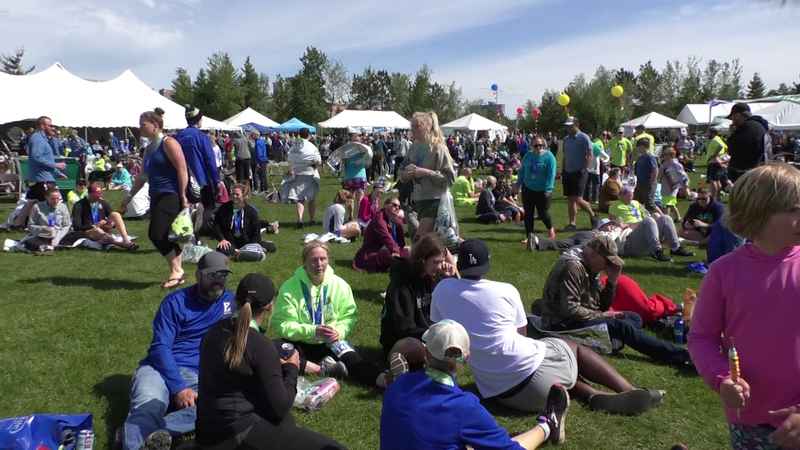 Running can be enjoyable, and everyone can become a runner.[WDIO, File]

Grebinonski and her friends want to share with anyone who thinks they can not or isn’t ready to run any type of marathon. Running is for everybody! You don’t have to have a certain body shape or anything," says Cassandra Prange. Running is really a sport that anybody can take up and do at their own pace and be a runner!"