Two hikers are about to begin the Minnesota portion of the North Country National Scenic Trail on a six-month adventure that could set two "firsts."

Ryan Bunting and Dana Burkett, who go by the trail names Constantine and Magpie, are through-hiking the entire trail. They began in Vermont in May and expect to finish in North Dakota by the end of October.

"We’re pretty much the only through-hikers we’ve run into. We’ve run into two others that were finishing up their hikes from previous years,” Bunting said.

The hikers say they found that on the eastern part of the trail, campsites are spaced farther apart and the trail has a lot of walks along highways. Until reaching Michigan, they were the only backpackers and were greeted with suspicion in some areas, but welcomed in others. 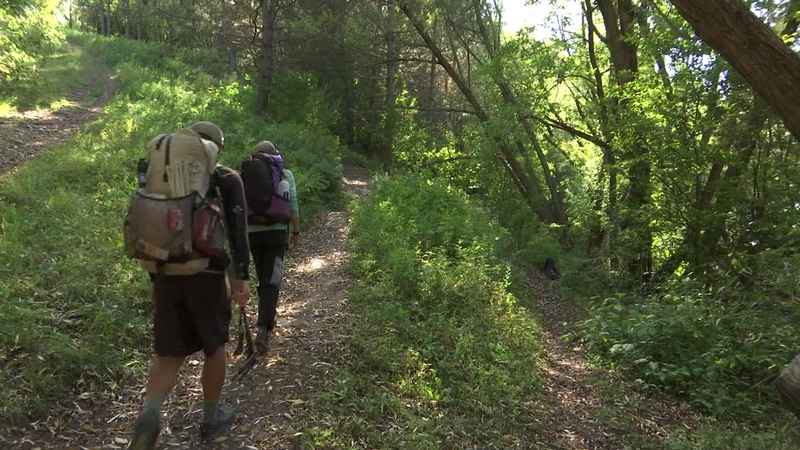 To complete the entire trail in one season, they need to keep on track, hiking an average of 32 to 33 miles per day and only stopping a half hour for lunch.

"This trail’s length, if you’re going to do it as a through hike, basically demands that you be in the most extreme version of through-hiking as a sport. You have to be a really dedicated athlete every single day as opposed to having just a leisurely walk in the woods and having a good time,” Burkett said.

While hiking the trail, Bunting and Burkett run a company called Elevenskys that sells durable shorts and pants made for long hikes. They found a need for such gear on previous hikes, and Bunting has now been wearing the same pair of shorts for 7,000 miles of hiking.

The North Country Trail is said to run more than 4,600 miles, but the hikers are finding that it’s at least 100 miles longer as they collect more precise GPS measurements on their hike. The trail follows the route of the Superior Hiking Trail through northeastern Minnesota, and the couple will begin that section on Friday.

The hikers are posting daily videos of their adventures on a YouTube channel called HikingAmerica.