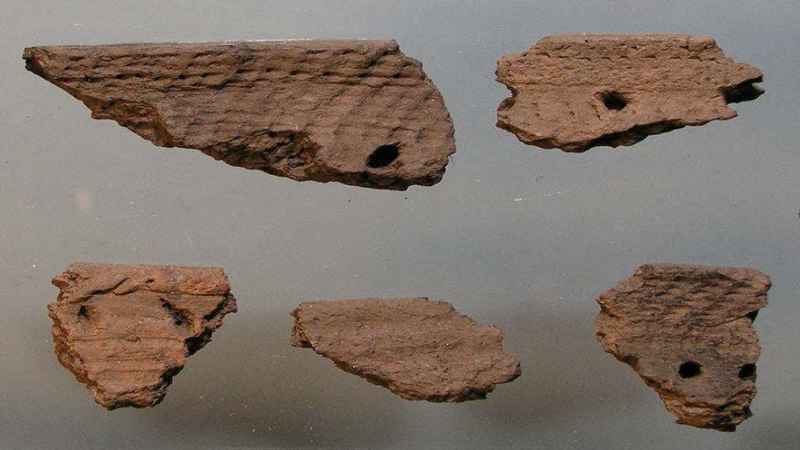 A piece of a ceramic vessel found in the BWCAW has been dated to at least 1,600 years old.[Forest Service]

Radiocarbon dating has confirmed that a broken piece of a ceramic vessel found in the Boundary Waters Canoe Area Wilderness is between 1,600 and 1,750 years old.

The Forest Service says a lab at University of California-Irving determined the age based on carbonized food residue found on the interior of the broken piece. The piece contains decorative elements associated with the Laurel Cultural Tradition, which was prevalent in the region from about 2,100 to 1,200 years ago.

Jaylen Strong, Tribal Historic Preservation Officer for the Bois Forte Band of Chippewa, is quoted in a Forest Service news release as saying it’s important to get an accurate date "to demonstrate the sophistication of the people and their land uses here for thousands of years. Artifacts like this help to improve the knowledge of people who used this land that can often be misrepresented."

The people of the Laurel Culture lived in areas now part of Minnesota, Ontario, Manitoba, and Michigan.

Lee Johnson, Superior National Forest Archaeologist, says they are "fairly confident" that there are sites in the Forest that are as old as 10,000 years, but it’s good to have exact dates confirmed by radiocarbon testing.

"The site location and artifacts suggested a long history of ancestral Native American use of the site during the summer months for both fishing and manoomin (wild rice) processing; however, the radiocarbon date gives a really specific point of time to contextualize that use," Johnson said in the news release.

The site has also produced other finds, including remains of maize and manoomin on other ceramic pieces and an obsidian flake that was sourced to present-day Idaho. The origin of the obsidian flake indicates that a trade network existed at the time, the Forest Service says.