Capturing Lake Superior, a Minneapolis Filmmaker offered the final pieces to his film

With such a snowy and windy day many were quick to get out of the elements, however there were some out on the coast of Lake Superior taking in the waves.

Filmmaker and Director of the Lake Superior documentary film Freshwater Ian Planchon was out getting final footage for his project.
The director says, "We thought we were done last week, but the big waves rolling in kind of enticed us for one more day of shooting."

Minneapolis director Ian Planchon says he was out on a camping trip when he saw surfers out on the lake, which prompted him to start the three year process.

Freshwater is set to premiere at NorShor Theatre February 19th and is ready to showcase the best of Lake Superior.

Planchon says, "Lake Superior is the character. And it’s everything that surrounds the lake, and it’s the story that we are following. People’s connection to the lake, the scientists that explore and research the lake, and then obviously the people that enjoy it like these surfers." 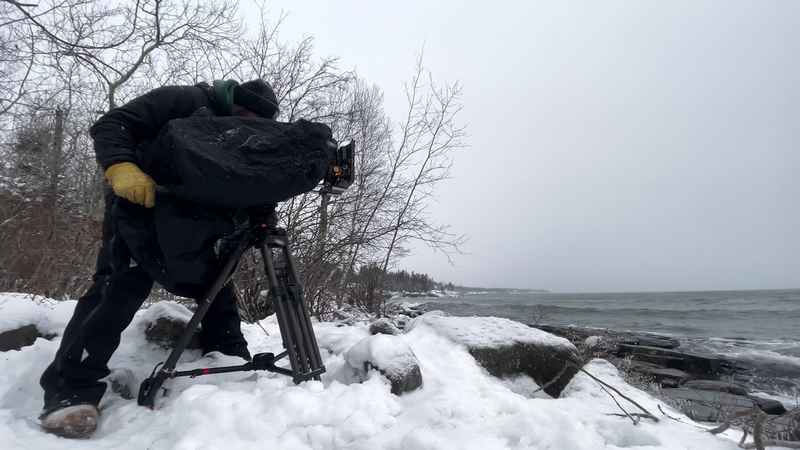 Freshwater is premiering at the NorShor Theatre February 19th.

For the surfers Lake Superior has become the destination to surf in freshwater. Surfer Mike Victor explains how they are able to do the sport in the cold. He says, “It’s all in the wet suit technology. This is six milliliters of neoprene and a couple layers under that so it works."

Ian also aims to inform those about the current dangers the lake faces to keep it safe. He says, "But it’s also the fastest warming lake in the world and that’s scary. And so we hope people take away; one, what’s happening to this lake. And two, A better connection to the lake.”