Similar to most college hockey players St. Paul native Will Francis is staying busy this offseason gearing up for the winter. He’s a Division I University of Minnesota Duluth (UMD) men’s hockey sophomore, a 2019 Anaheim Ducks draft select, and a cancer survivor.

It was February of 2020 when he started feeling sick. Francis said he was sleeping more often and losing his appetite, eventually unable to finish a meal which was unique for his 6’5”, over 200 pound stature.

It all came to a head during a snowmobile trip in Grand Marais in March of 2020, when his dad would take him to the hospital. After his blood work came in results showed that he didn’t have an early strain of Covid, but rather leukemia.

"They came in and did all those tests and the nurses were in full scrubs, face shields, masks, the whole thing like they were worried it was Covid," Francis recalled. "The doctor comes back just in street clothes, nothing on. We’re like alright either everything is okay or something is really wrong."

Francis went on to share the doctor words; "we took your blood counts and your white blood count is at 178,000. He’s like normal for you would be around 10,000. I’m like ok so are you telling me I’ve got the power of 18 people? He’s like no not exactly." 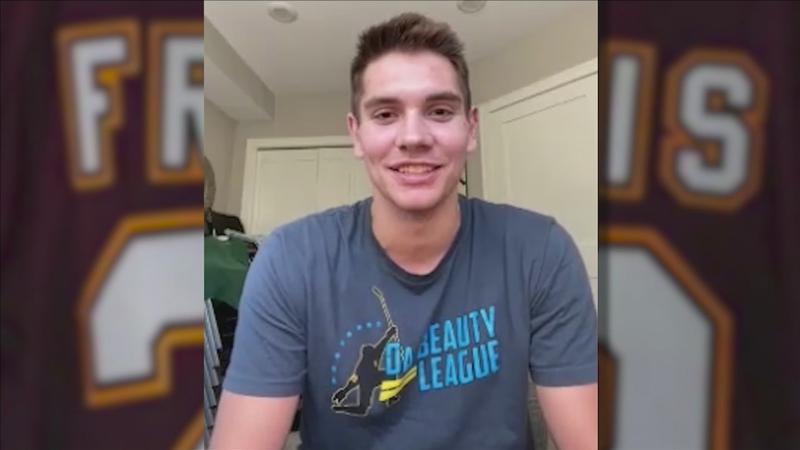 Then 19-years-old, he would begin treatment isolated from friends and family during the pandemic. However last year, over a year and a half after his diagnosis, the freshman was well enough to skate in his first season at UMD appearing in five games.

"I was only going in this last year once a month for treatment so it was just maintenance," Francis said. "I was being with [UMD] the whole year. We had Zach [Stejskal] obviously who was diagnosed with testicular cancer in I believe it was October. Obviously everyone was so supportive."

Then just last week Francis rang the bell at Fairview Masonic Children’s Hospital signaling he won his battle against cancer.

"Couldn’t keep the smile off my face," Francis said. "Just really happy to do that and it’s something that I think in the future can be inspiring to other kids that are going to end up maybe dealing with something similar to that."

Francis and the Bulldogs will drop the puck on their 2021-2022 season October 1st hosting Arizona State University.