On Sunday the Brewhouse Triathlon returned for their 34th annual race.

Over 300 tri-athletes swam, biked, and ran around Duluth’s Island Lake. With short and long course options organizers called it, "a race for everybody".

"We have people that are elites in our state that are out here really doing a race, and then we have people who have never actually competed in a triathlon before. They’re just here wanting to do their own personal best, and it’s amazing to have these groups be able to be here together," said organizer and volunteer Shelly Pierson-Evans.

Two Duluthians, completing a .75K swim, a 20K bike route, and 5K run, claimed the men’s and women’s titles. Mike Ward finished first with a time of 1 hour and 5 minutes and 51 seconds. Coming in under a minute later Shyanne McGregor took second place overall with a time of 1:06.33.

In the long course, which consisted of a 1.5K swim, 40K bike, and 5 mile run, Nathan Mueggenberg took first place finishing with a time of 2:05.29. Elaine Nelson of Duluth took the female division crown finishing in 2:13.35. 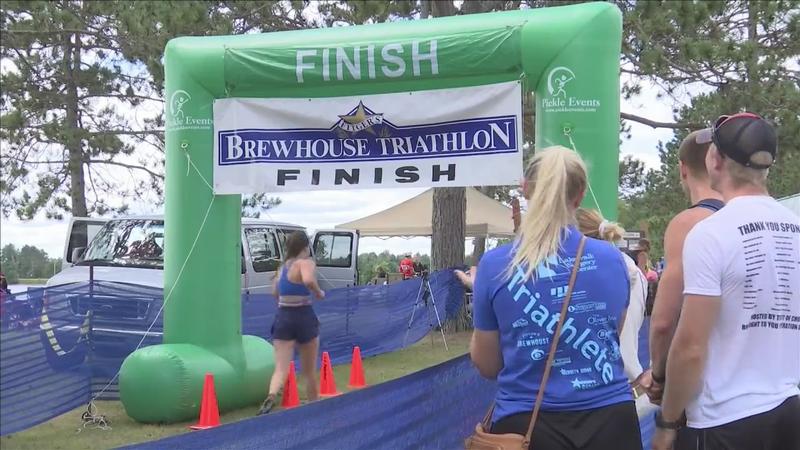 A runner crosses the finish line of the 34th annual Brewhouse Triathlon at Island Lake on Sunday.[WDIO/Kenny Johnson]

The day was capped up in the afternoon with a Root Beer Kids race, helping the next generation of tri-athletes grow.