Boys of fall ready for one more season with the Bulldogs

A handful of super senior University of Minnesota Duluth (UMD) football players will be back in a Bulldog uniform this fall.

"We have 9 of 15 returning seniors from really two years ago," said UMD football head coach Curt Wiese. "So these guys have given up a lot. Postponing graduation, postponing jobs, taking an extra major going to graduate school, so we’re excited to have those guys back."

Four of those guys happen to be captains. Outside linebacker Nate Pearson and wide receiver Johhny McCormick both redshirted as freshman back in 2016. This last season in 2020, was supposed to mark their final season with the Bulldogs. When that was canceled, they both decided to come back for a sixth season.

"The love for football, kind of finishing off my education and really going for the closure," Pearson said is why he returned.

"I missed the 2019 season with an injury, so I really haven’t played in two years," added McCormick. "I wanted to finish my career. I really didn’t come to play just two years of college football." 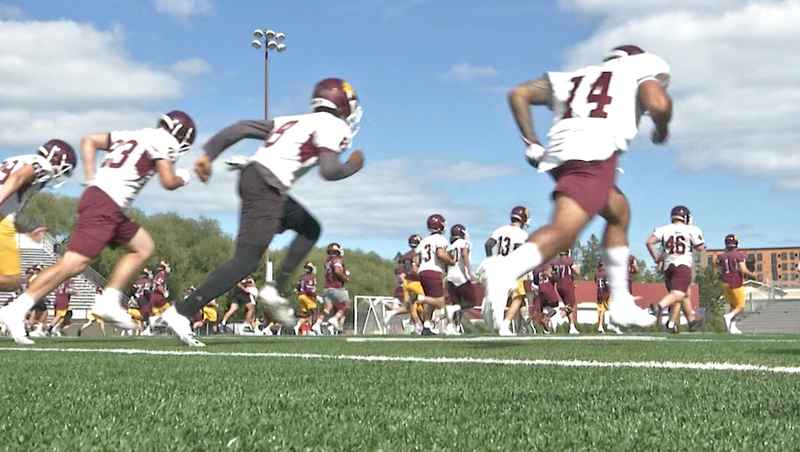 When it comes to school, Pearson who graduated to become a math teacher, will be going back for his masters in education. McCormick will be taking one online class to finish out his exercise science degree before applying to physical therapy schools.

"It will be nice to not have a huge school load with the season. It will give me more time to focus on game planning and stuff like that going into the week," said McCormick.

September 2 marks the Bulldogs’ season opener. They’ll get started with fall camp on August 8. After being away from competition for 22 months, the Bulldogs are itching to get back on the field.

"It will be good to get back to practice. That whole fall camp, it really makes you feel like a full time football player because we’ve got really 10-12 hours every day of football stuff. It will be good to see the guys again and be able to go tunnel vision on football and not have to worry about anything else for three weeks or so," said McCormick.

"I’m just excited for, at least fingers crossed, a COVID free football season. Hearing the roar of the crowd, winning games; you can’t beat that at Malosky [Stadium] ," added Pearson.

The team believes their leadership among this group will be a big advantage.

"Those guys understand they only have one opportunity left and I’m hoping they can help lead that into the underclassman that we only get so many opportunities at whatever it may be," said Wiese. "Last year, it was taken away from us, so let’s play every down like it’s our last."