President Joe Biden is pledging to Americans still trapped in Afghanistan: “We will get you home.”

Biden also said Friday the United States is committed to evacuating all Afghans who assisted the war effort – a potentially vast expansion of the administration’s commitments on the airlift so far, given the tens of thousands of Afghan translators and others, and their close family members, seeking evacuation.

Biden’s comments at a White House news conference Friday come as the U.S. government struggles to ramp up a massive airlift clearing Americans and other foreigners and vulnerable Afghans through the Kabul airport, rescuing them from a Taliban takeover of the country.

Biden is facing criticism for a chaotic and often violent scene outside the airport and crowds struggle to reach safety inside.

Evacuation flights at the Kabul airport had stopped for several hours on Friday because of a backup at a transit point for the refugees, a U.S. airbase in Qatar, U.S. officials said. However, flights resumed in the afternoon. 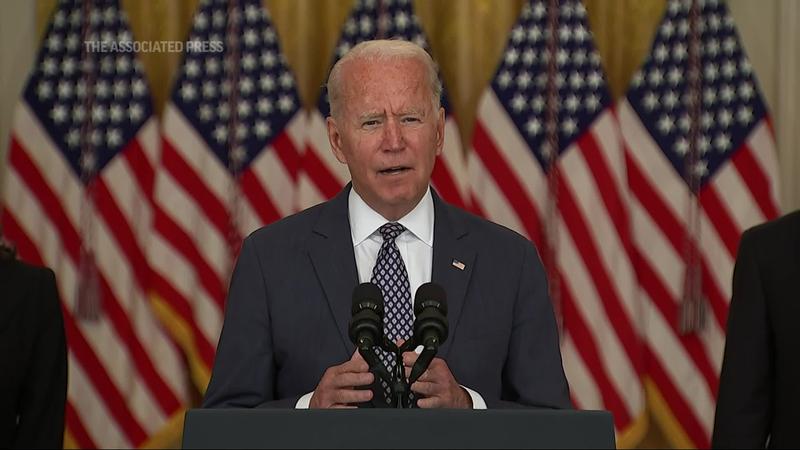 As many as three flights out of Kabul were expected in the next few hours, going to Bahrain and carrying perhaps 1,500 evacuees in all, said an official, speaking on condition of anonymity to discuss military.

"These operations are going to continue over the coming days before we complete our drawdown. We’re going to do everything, everything that we can to provide safe evacuation for our Afghan allies, partners and Afghans who who, who might be targeted if because of their association with the United States," Biden said.

Tens of thousands of people remain to be evacuated ahead of the United States’ Aug. 31 deadline to withdraw its troops from the country, although the pace had picked up overnight. A defense official said about 5,700 people, including about 250 Americans, were flown out of Kabul aboard 16 C-17 transport planes. On each of the previous two days, about 2,000 people were airlifted.

With desperate crowds thronging Kabul’s airport, and Taliban fighters ringing its perimeter, the U.S. government renewed its advisory to Americans and others that it could not guarantee safe passage for any of those desperately seeking seats on the planes inside.

Biden said as the White House continues to work the logistics of evacuation, it’s in constant contact with the Taliban, "working to ensure civilians have safe passage to the airport."

"We made clear to the Taliban that any attack, any attack on our forces or disruption of our operations at the airport will be met with a swift and forceful response," Biden said.