President Joe Biden showcased his commitment to Native Americans on Monday by taking steps to improve public safety and justice for their communities and seeking a 20-year ban on oil and gas drilling on Chaco Canyon, an ancient heritage site in northwestern New Mexico.

In signing the order on public safety, Biden said it was "long overdue."

"We’re going to make some substantial changes in this country and it is going to continue," he said.

Biden addressed the first tribal nations summit since 2016. Leaders from more than 570 tribes in the United States are expected participate in the two-day event, with nearly three dozen addressing the gathering.

The White House is hosting the summit virtually due to the COVID-19 pandemic, which has affected Native Americans and Alaska Natives at disproportionate rates. 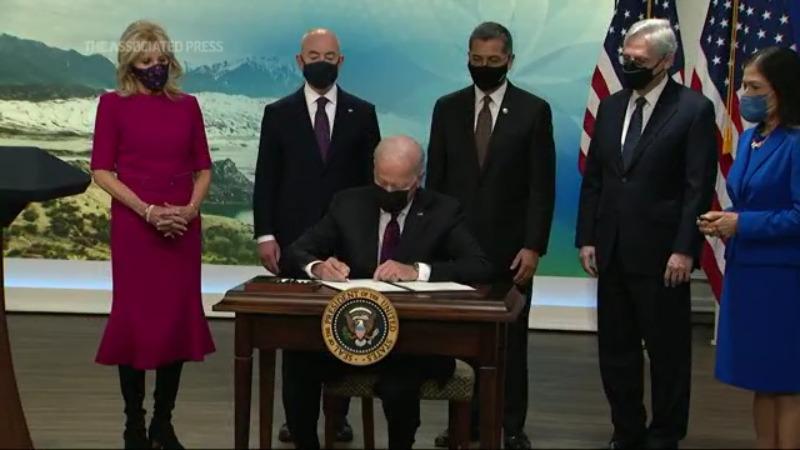 American Indians and Alaska Natives are more than twice as likely to be victims of a violent crime and at least two times more likely to be raped or sexually assaulted compared to other races, according to the Association on American Indian Affairs.

Ahead of signing the infrastructure bill later Monday, Biden said, "tribal lands have been chronically under funded for generations, and so I’m very proud to say that when I sign the bill outside on the South Lawn shortly, the single largest investment in tribal infrastructure ever is going to occur."

He said more than $13 billion in direct investments will be made to Indian nations along with tens of billions more in grants being made available.

The tribal nations summit coincides with National Native American Heritage Month and is being hosted by the White House for the first time. The summit was not held during the Trump administration; past conferences took place at the Interior Department.

Since taking office in January, Biden has taken several steps that the White House says demonstrate his commitment to tribal nations.

Among them are naming Haaland, a former congresswoman from New Mexico, as the first Native American to lead the Interior Department, the powerful federal agency that has wielded influence over U.S. tribes for generations. Haaland is a member of the Laguna Pueblo.

Biden’s coronavirus relief plan included $31 billion for tribal communities, and the administration has worked closely with tribal leaders to help make COVID-19 vaccination rates among Native Americans among the highest in the country, the White House said.