President Joe Biden used his first meeting with a foreign leader since ending the war in Afghanistan to send the message Wednesday that the United States – unburdened of its "forever war" – is determined to become a more reliable ally to its friends, in this case Ukraine.

Biden played host to Ukrainian President Volodymyr Zelenskyy for a long-sought Oval Office meeting and tried to reassure him that his administration remains squarely behind the Eastern European nation.

"As we celebrate 30 years of Ukrainian independence, the partnership between our nations grows stronger and it’s going to become stronger than that," Biden said.

The Ukrainian leader, who had found himself ensnarled in Donald Trump’s first impeachment, arrived at the White House looking to Biden for increased military aid and backing for his country’s bid for NATO membership. 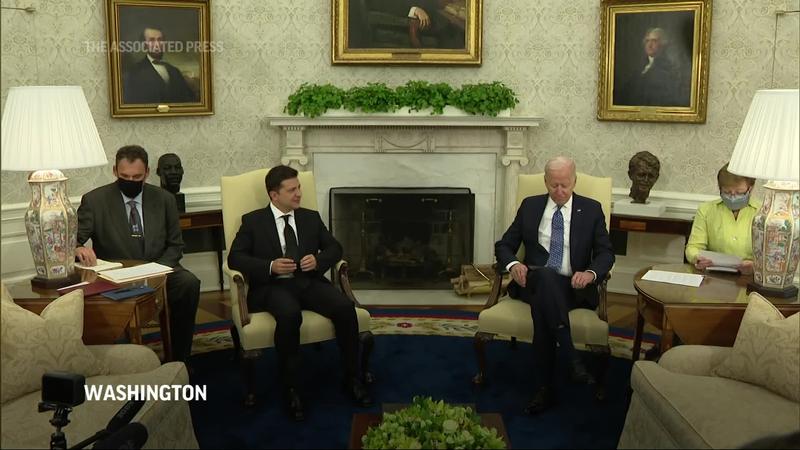 The meeting was postponed two days while Biden and his national security team were consumed by the American military withdrawal from Afghanistan. The withdrawal, which concluded Monday, left behind many Afghans who had worked with the Americans and their allies and who now fear Taliban rule. This led to criticism that the U.S. was less than a reliable international partner, something Biden was eager to counter.

The optics of the moment did not go unnoticed by the Ukrainian president, who is looking to strengthen his country’s relationship with the U.S.

"At a difficult time for the world and the United States … still you found time for us and we’re thankful for this indeed," Zelenskyy said.

In advance of the sit-down, the Biden administration said it was committing up to $60 million in new military aid to Ukraine.

The administration said in a notification to Congress that the aid package for Ukraine was necessary because of a "major increase in Russian military activity along its border" and because of mortar attacks, cease-fire violations and other provocations.