President Joe Biden has announced a new round of sanctions targeting Russia after its invasion of Ukraine, charging that Russia’s Vladimir Putin "chose this war" and his country will bear the consequences.

The sanctions target Russian banks, oligarchs, and high-tech sectors. They include restrictions on exports to Russia and sanctions on Russian banks and state-controlled companies.

The penalties fall in line with the White House’s insistence that it would look to hit Russia’s financial system and Putin’s inner circle, while also imposing export controls that would aim to starve Russia’s industries and military of U.S. semiconductors and other high-tech products.

Biden, for now, is holding off imposing some of the most severe sanctions, including cutting Russia out of the international SWIFT bank payment system.

Biden also said the U.S. is deploying additional forces to Germany to bolster NATO. The U.S. has also sent military troops to Estonia, Latvia and Lithuania. 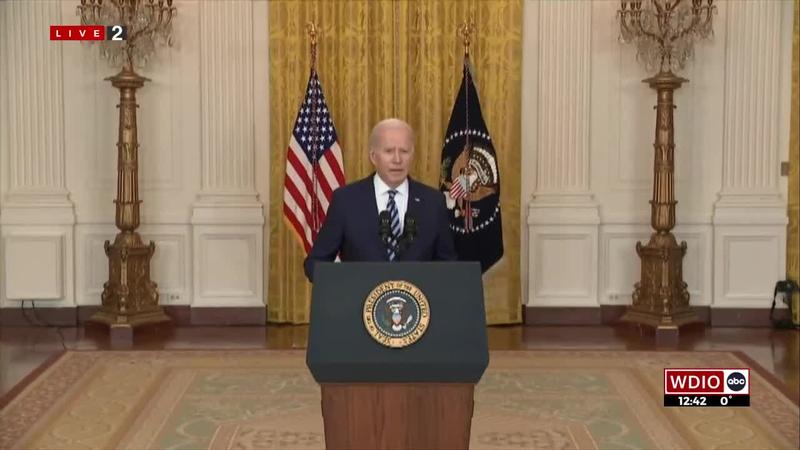 Biden says the sanctions against Russia will not disrupt the global oil and natural gas markets, saying “Our sanctions package is specifically designed to allow energy payments to continue.”

Biden also says that U.S. oil and gas companies should not exploit the geopolitical risks to hike their prices and raise their profits.

A key concern has been preserving Russian oil and natural gas exports, which are vital sources for Europe and other countries. Financial markets already view the Russian invasion in Ukraine as straining energy supplies with the soon to expire futures contract for Brent crude increasing more than 5% to top $100 a barrel.

The U.S. State Department has at least temporarily withdrawn its remaining diplomatic presence from Ukraine.

The department says a core group of essential personnel who had relocated from the capital of Kyiv to the western city of Lviv near the Polish border earlier this month will now work from offices in Poland rather than on Ukrainian territory.

Earlier this week, the department had instructed those diplomats to work in Lviv during daylight hours but to spend their nights in Poland.

The department says they were ordered late Wednesday not to make the commute back to Lviv to work beginning Thursday until further notice.