Beyond the Playbook: Degroot grows champion team at UWS

This past saturday was a huge day for University of Wisconsin Superior soccer. Not only did the mens program win there 5th straight Upper Midwest Athletic Conference (UMAC) title, the womens team made program history.

For the first time in the 29-year history of the program, the UWS women’s soccer team is NCAA tournament bound. After winning their first UMAC postseason championship with a 3-2 victory over Northwestern.

After finishing out the 2020 campaign with the best record in school history, head coach Degroot headed into her 5th season with the feeling that this was the team to get the job done.

"We are fighters, we are scrappy, we are gritty, and we will find a way to get things done. I think a couple years ago we were a defensive team, now we pulled off alot of offensive weapons. We are just stepping to the next level and we aren’t done yet. It’s only going to get better," coach Degroot added. 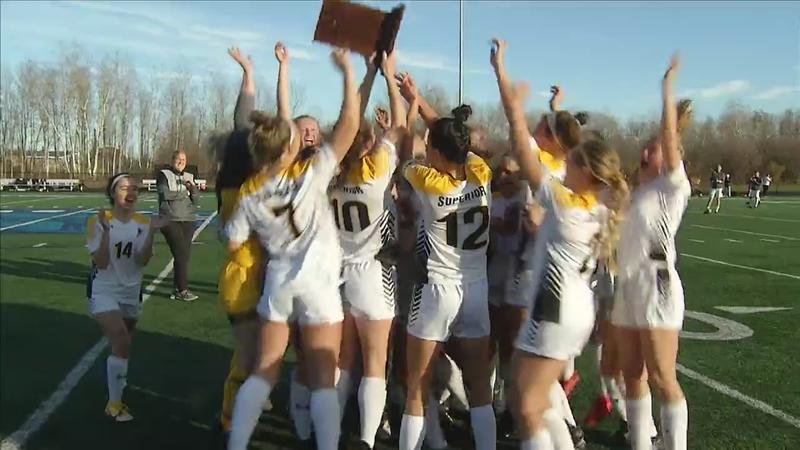 A duo of players that contributed to the success of the team, were Superior native Niya Wilson. She leads the team with 20 goals, and id supported by senior Annah Schussman. Schussman became the program’s all-time leader of career goals in the UMAC semifinal match, while also adding 2 more goals in the champioship game.

Annah Schussman said that, "the first one came and that was a little bit of a relief. It was also like, lets go we arent done yet. We were like 2 is a dangerous lead and we saw that we had to keep going and not let up."

Shussman will not only cap her senior season in the NCAA tournament, but also as the UMAC tournament mvp. Tallying a whopping total of four goals and one assist in the two matches.

"Honestly both is just incredible. I’m honestly just so greatful as so happy to be here. It’s crazy being a senior just having this cap stone today, it feels really awesome to do that," Schussman continued.

The story for this team continues, as they face Saint Catherine in their opening matchup of the NCAA tournament, Saturday in Saint Paul.