Last Friday night the lights flipped on at Public Schools Stadium (PSS) and cheers rang out for the Duluth Denfeld football team as they kicked off against Cloquet.

The decades old rivalry matchup drew a large crowd, including the Denfeld class of 1976 who were celebrating their 45th high school reunion. However one seat, where former Hunters starting tackle Dave Kent would have been his usual class clown self, was empty.

"What will stick with me are the memories that were shared tonight, and being able to share it with my two children and their spouses," said Dave’s wife Cindy Kent during halftime.

Kent passed away in 2019 after a short illness. While he hadn’t played a down of Denfeld football in over four decades, his former head coach, the legendary Marv Heikkinen, alongside former assistant coach Dukes Knutson, teammate Steve Jewell, and Cindy, returned to the turf to honor the all-city athlete’s memory.

"I hope that anyone in my position would follow my example," Heikkinen stated following the short halftime ceremony on the field of PSS. 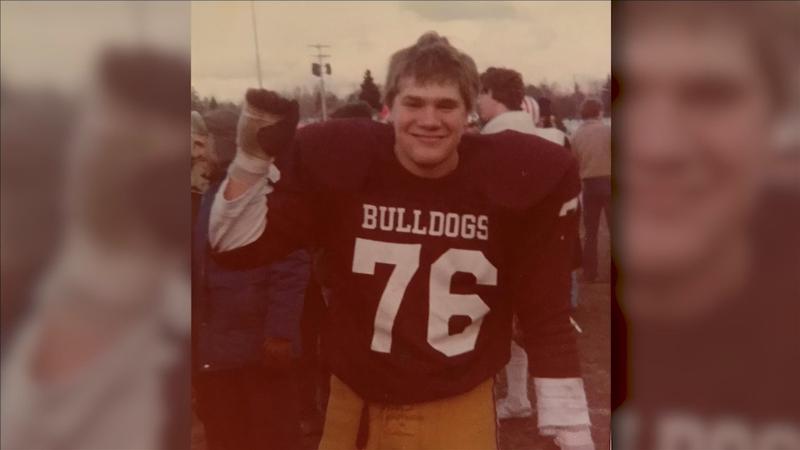 Dave Kent as a UMD Bulldog in the late 1970s.[Cindy Kent]

Cindy added, "especially now with Covid, we have to really be thankful to our teachers and the coaches who spend so much time with our kids and helping them become adults."

Knutson chimed in saying, "Coach Heikkinen and I think we’d agree that our goal as teachers was always to strive for excellence and not mediocrity."

Both men felt Kent achieved that, as he went on to play four seasons at the University of Minnesota Duluth (UMD) under another legendary football coach, Jim Malosky. Later the offensive lineman would even help coach the Bulldogs to their first undefeated season.

"We had a wonderful team, and maybe not the most skilled but with so much heart," Heikkinen said. "We had a great season and memories are made with people like that."

While sometimes it’s time to say good bye to friends, all the Hunters young and old know the Denfeld spirit never dies.

Steve Jewell closed out the memorial moment with this, "Denfeld Hunters have a legacy of past, present, and this is the future of Denfeld football. Go Hunters, go maroon, go gold."