Wednesday nights are something Lauren Burton looks forward to every week.

"It’s my favorite part of the week."

She sets sail with the crew on Kicks. The boat competes in the Wednesday night sailboat races put on by the Duluth Yacht Club.

"My first memory is just feeling like I don’t know how I can stay on this boat. Everybody else is walking around on it," she explained.

Burton started sailing for her first time this summer. Even a few months in, she says she’s constantly learning how things work. 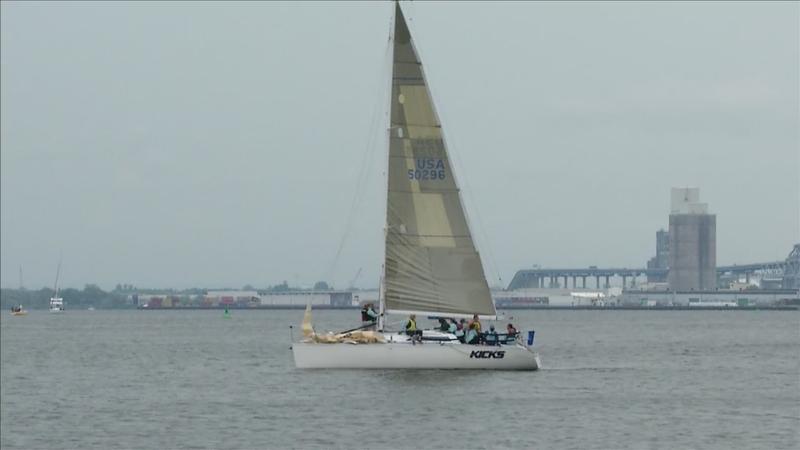 Kris Henry and her crew sail off into Duluth's harbor in their sailboat 'Kicks'. [WDIO/Chelsie Brown]

"Some of the things I’ve absorbed, I just started to get the terminology in my head. A halyard and a vang and just different things that," said Burton. "Every fifth word was like a foreign word and now, it’s becoming part of my language."

Burton has her friend Kris to thank for teaching her the ropes.

"Three of four of the sailors that we have on our boat today were already racing with us, but a couple more came from other boats," she explained. "A good half of the people had a little bit of experience,but some had no experience at all," said Kris.

Kris Henry has been sailing since she was 15 years old. She ‘s the owner of Kicks and has been a part of the Duluth Yacht Club since 1996.

"Racing is kind of a side benefit for me. It feeds my soul as far as teamwork is concerned and I love teaching people how to sail, but it’s really about community," she said.

Henry was a part of a group of women in the club that had the idea to create an all female crew last summer. When COVID-19 canceled the racing season, they met when they could, but it was all aboard this summer as they finally put together their vision.

It’s all hands on deck for this core group made up of about 14 ladies. It is rare to find an all female boat, so they get noticed, but they don’t let it define them.

"Sometimes going through the canal, some people will call out, ‘hey all women boat,’" explained Burton. "I don’t know any different," she added. "I love the fact that our captain is the woman, but other than that it’s a group of sailors."

When it comes to racing, they enjoy the competition and so much more.

"All the people that race we have this thing in common. We have sailing in common and it is just something we enjoy together," said Henry.

She added that they are always looking for future sailors to join.

"When I first started sailing, someone said, ‘hey, did you hear about the new Duluth Yacht Club?’ The said, just go down and somebody will put you on a boat. I thought it couldn’t possibly be that easy to get involved, but it really is."

For more information on how to get involved visit: https://www.duluthyachtclub.com/