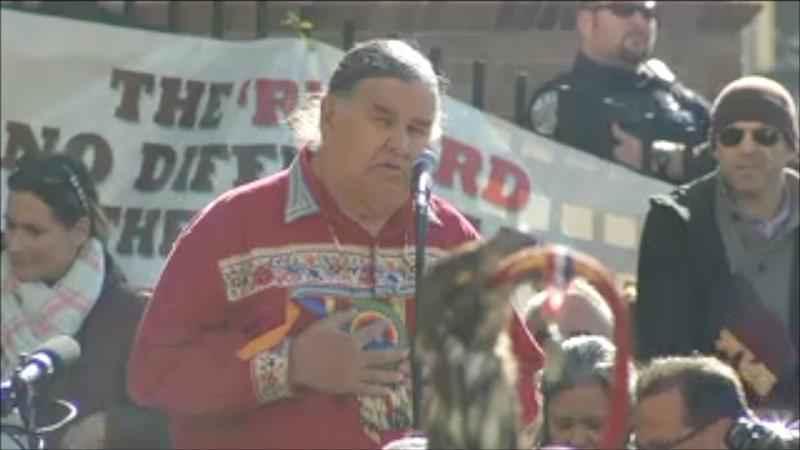 Clyde Bellecourt speaks at a 2020 rally in Minneapolis.[KSTP-TV file]

Clyde Bellecourt, one of the most important leaders of the Native American civil rights movement, died Tuesday morning.

Peggy Bellecourt, his wife, said he died of cancer. He was 85.

Bellecourt co-founded the American Indian Movement, or AIM, in Minneapolis during the summer of 1968 with activists George Mitchell and Dennis Banks.

Over the years, AIM has fought for treaty rights and restoring tribal land. The group called out instances of cultural appropriation, provided job training, sought to improve housing and education for Indigenous people, provided legal assistance, spotlighted environmental injustice and questioned government policies that were seen as anti-Indigenous.

In 1972, AIM launched the Trail of Broken Treaties, a march from St. Paul to Washington, D.C., that ended with a weeklong occupation of the Bureau of Indian Affairs. The occupation spurred treaty negotiations between activists and the federal government and secured the appointment of a Native American to a post within the bureau.

At times, AIM’s tactics were militant, which led to splintering in the group. In one of its most well-known actions, the group took over Wounded Knee on the Pine Ridge Reservation in South Dakota in 1973 to protest U.S. and tribal governments. The 71-day occupation turned violent, and two people died in a shootout.

Bellecourt was born and raised on the White Earth Indian Reservation. His Ojibwe name is Nee-gon-we-way-we-dun, which means “Thunder Before the Storm.” He was the only remaining living founder of the AIM movement, said Lisa Bellanger, the group’s current co-director.

Bellecourt was among those who protested the 1992 Super Bowl in Minneapolis, when the Washington Football Team beat the Buffalo Bills. The Washington team dropped its old name in 2020 after decades of criticism it was offensive to Native Americans and after pressure from sponsors amid a national reckoning on race in the U.S. Bellecourt long called for the team’s name to be changed.

Bellanger said condolences have been coming in from around the globe.

“He was known worldwide,” she said.