It’s took 98:15 minutes and double overtime for the Bulldogs to clinch their first trip to the Frozen Four title game since 2010. Rogge’s goal, plus a career-high 46 save performance from senior goalie Emma Soderberg, was enough for celebration but it was back to business Saturday as UMD held their final pre-game practice.

“It’s kind of routine right now,” Soderberg said about recovering from long games. “We play usually Friday and Saturdays, so every Friday we talk about hydration, taking care of your body.”

After topping Northeastern the Bulldogs then watched Ohio State rally to defeat Yale University 2-1 and set up an all Western Collegiate Hockey Association (WCHA) final for the sixth time in league history.

“I definitely think it’s cool,” fifth year forward Anna Klein shared. “It really showcases how good the WCHA really is, and we might not get the same rep that the people out East do just because there’s so many teams out here, but it shows that we’re a really good league.” 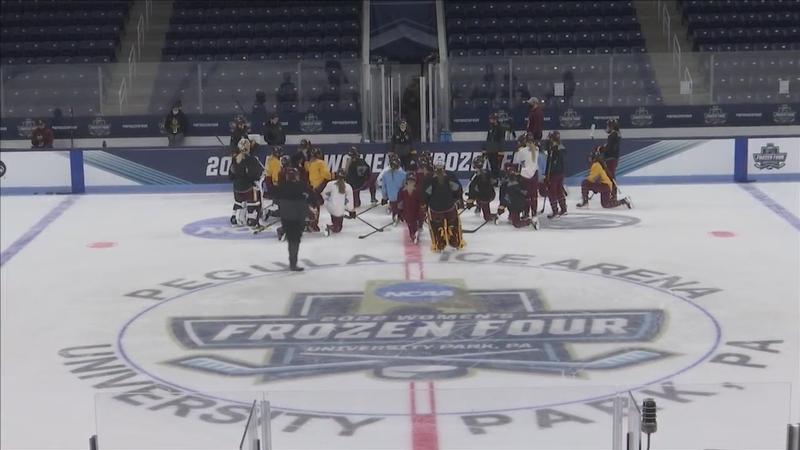 The top-ranked Buckeyes, and the WCHA Final Faceoff champions, skate the number one offense in Division I into their first-ever title game appearance. They’re up against a Bulldogs squad that is riding back-to-back upsets and have only allowed two goals this tournament.

“They’re gritty but they’re also fast and they’re a skilled team,” Klein said about Ohio State. “Obviously Sophie Jaques has been having a great season so just watching out for her, and overall I think it will be a great game.”

This one though is bigger than just a game. In the first year of an 11 team expanded tournament both championship teams will feature all female coaching staffs.

“I think it’s important for our athletes to see females in leadership roles,” head coach Maura Crowell said. “We have an alum on the other bench Zoe Hickel, which is really cool.” Crowell added, “it’s a long time coming.”

“These coaches are such good role models for us,” Soderberg said. “It makes it easier for us, we know that it’s okay to take our place and take our own stance. They empower us.”

Going 2-2 against the Buckeyes this season UMD will hunt for win number three and their sixth NCAA program title on Sunday. Puck drop is set for 3pm CT at Pegula Ice Arena where a WCHA champion will be crowned for the 19th time.