47 cats rescued from vehicle at rest stop near Harris

"The gentleman had been living out of his vehicle and obviously utilizing different public areas, and a passer by or must have seen him and contacted the local authorities. Then once they got on scene, realized kind of what the situation was," explained Humane Investigations Agent, Ashley Pudas.

The cats were living inside the car with their owner for some time, but the sweltering heat on Tuesday led the owner to release them to the Animal Humane Society.

According to AHS, fourteen cats were released to another local rescue organization before Tuesday, making the total 61 cats. They ranged in age from less than a year to over 12 years old.

"While I was out on scene, I was kind of watching everybody as they were coming out one by one," shared Pudas. "And a majority of their problems were kind of common things found with high population of animals." 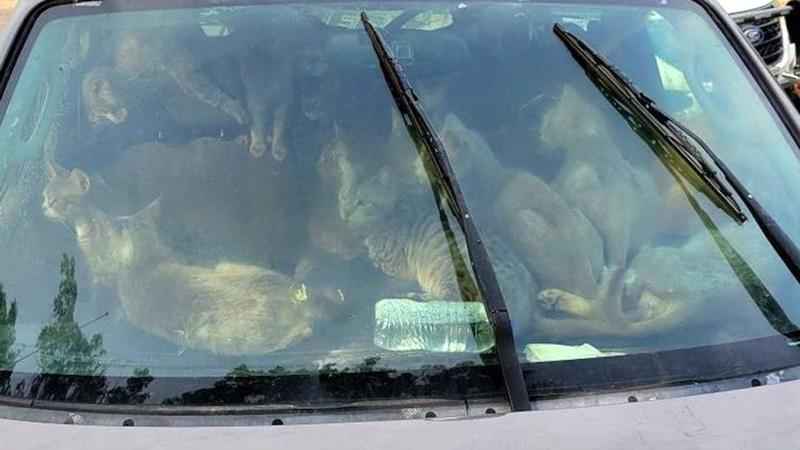 A total of 61 cats living in a vehicle were rescued at a Harris, Minnesota rest stop.[Animal Humane Society, Used with permission]

The cats and their owner were medically assessed and, despite the heat and unsanitary conditions, most had only minor issues, Animal Humane Society said.

"Some hair loss going on, some thinning of the hair. As well as some injuries like lacerations, maybe puncture wounds, just from cats fighting each other, getting too close to each other."

They are now being cared for, examined and evaluated by staff and will soon be sterilized and made available for adoption through AHS or one of its rescue partners.

"They’ll be vaccinated, vetteed, de-wormed FELV/FIV tested, they’ll be spayed and neutered before they’re put up for adoption," said Pudas.

If someone is feeling overwhelmed by their animal situation, or are seeking help in any way, visit the Animal Humane Society‘s website for resources and contact information.

"It’s actually more common than people realize. This is something that as agents we deal with typically weekly as far as high populations of animal," explained Pudas. "We have a great group of staff that will get them set up with appointments to start bringing in animals if they’re looking to just reduce their numbers. We also have low cost spay neuter services and get low cost veterinary care as well. So we do have our veterinary centers and the PET Helpline can actually help them through that process as well."