20-year war is over: Last US planes leave Afghanistan 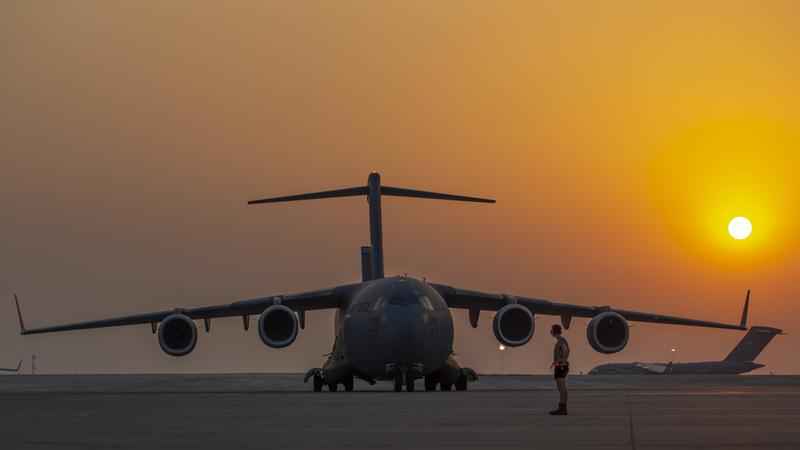 A C-17 Globemaster lll that supported the effort to evacuate Americans from Afghanistan is seen at a base in Qatar on Aug. 23.[U.S. Air Force photo by Airman 1st Class Kylie Barrow]

The last U.S. planes have flown out of Afghanistan after 20 years of war, meeting a self-imposed Tuesday deadline to withdraw U.S. troops from the country.

General Kenneth McKenzie, Jr., the Commander of United States Central Command, said in an afternoon news conference that all U.S. service members are now out of the country.

U.S. Rep. Pete Stauber had said about 1,100 Minnesota National Guard members were in Afghanistan as of last week, out of a total of about 5,000 American soldiers in the country.

The Pentagon says some American citizens who wanted to leave were unable to make it to the Kabul airport to board U.S. evacuation flights. McKenzie told reporters that the U.S. believes it was able to evacuate the “vast majority” of Americans who wanted to leave, but that it was aware of some who were couldn’t depart.

McKenzie says that in the final American flights out of Afghanistan, “We were not able to bring any Americans out.” The last American civilians were evacuated about 12 hours before U.S. forces left.

McKenzie says the effort to bring out Americans will now fall on diplomatic channels.

Earlier this month, President Joe Biden pledged that the U.S. would remain in Afghanistan until it was able to get all of its citizens out of the country. “If there’s American citizens left, we’re going to stay until we get them all out,” he told ABC News.

Celebratory gunfire erupted across the Afghan capital early Tuesday after news that the U.S. withdrawal had been completed. Earlier, no Americans were hurt when Islamic State militants had fired a volley of rockets at Hamid Karzai International Airport in Kabul.

The departure of the last planes marks the end of a massive U.S.-led airlift in which tens of thousands of Afghans were able to flee Taliban rule.

More than 2,400 Americans lost their lives in the two-decade war, including 13 killed during an explosion last week at the Kabul airport.