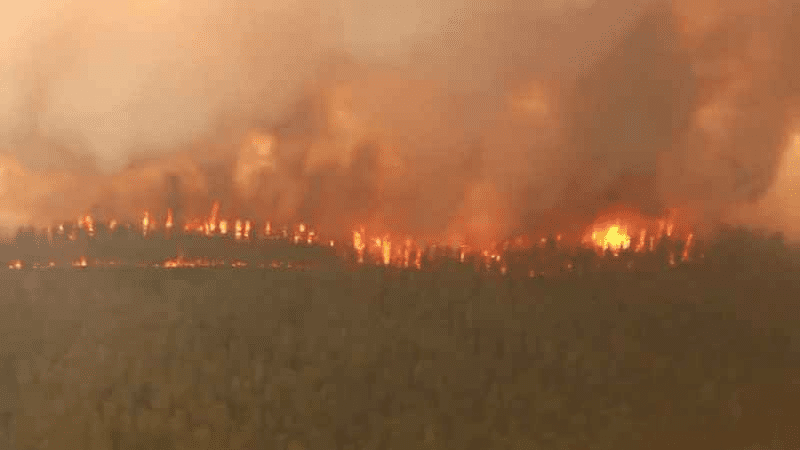 The Red Lake 68 Fire, seen on July 12, has burned more than 65,000 acres.[Ontario Ministry of Natural Resources]

Ontario’s Ministry of Natural Resources and Forestry says 100 wildfires were burning in the province’s Northwest region as of Friday morning.

Ten of the fires are in Quetico Provincial Park along the Ontario-Minnesota border. The largest Quetico fire, Fort Frances 35, has burned 5,815 hectares (14,369 acres) since June 9 and is also the fire that’s burned closest to the border.

The Quetico fires are dwarfed by much larger fires burning farther to the north.

The Kenora 51 fire, near the Ontario-Manitoba border, has burned more than 200,000 hectares (nearly 500,000 acres) since starting June 8 and is not under control. However, officials say fire behavior has been minimal on the southern and western edges of the fire and nearly 400 people who had evacuated from the community of Wabaseemoong are returning home.

Elsewhere, the Ministry says the Red Lake 77 fire has shown increased activity over the past couple of days on its western flank, but incoming wet weather was expected to help contain the fire. A few other large fires have burned in the Red Lake district.

The Ministry said wildland fires have burned more than 730,000 hectares (1.8 million acres) across Ontario so far this season. There have been 1,130 fires so far this year on Ontario compared with 570 last year and a ten-year average of 708.

As of this morning, there are 109 active #Forestfires across the province, 100 of which are in the Northwest region. So far this season, wildland fires have consumed more than 730,000 hectares across #Ontario. Fire updates: https://t.co/jEI8tBEUm6 pic.twitter.com/bJMAAX5KqH