By NICK PERRY The Associated Press 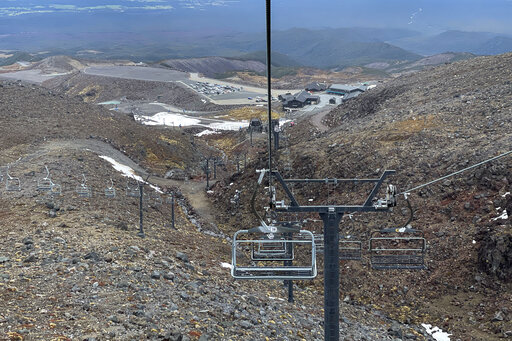 The ski slopes are almost devoid of snow at the Tūroa ski field, on Mt. Ruapehu, New Zealand on Sept. 22, 2022. A disastrous snow season has left two of New Zealand's largest ski fields on the brink of bankruptcy, with climate change appearing to play a significant role. (AP Photo/Nick Perry)[ASSOCIATED PRESS/Nick Perry]

The ski area was forced to close for the season this week, three weeks earlier than planned.

Rain repeatedly washed away the snow, and the ski area’s 50 snowmaking machines proved no match against balmy temperatures. Climate change appears to be a significant factor, after New Zealand experienced its warmest winter on record — for the third year in a row.

The disastrous snow season comes after the previous two seasons were severely disrupted by COVID-19, leaving Tūroa and its sister ski area Whakapapa on the brink of bankruptcy.

The two ski areas, which are among New Zealand’s largest, are owned by the same company and located on opposite sides of Mount Ruapehu. Should they be forced to close permanently, it would leave North Island, where more than three-quarters of the nation’s 5 million people live, without any major ski areas. 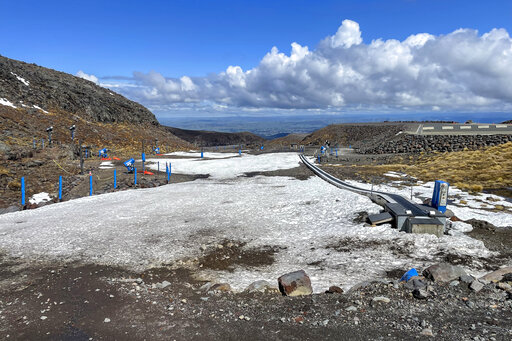 The learners' slope is almost devoid of snow at the Tūroa ski field on Mt. Ruapehu, New Zealand on Sept. 21, 2022. A disastrous snow season has left two of New Zealand's largest ski fields on the brink of bankruptcy, with climate change appearing to play a significant role. (AP Photo/Nick Perry) 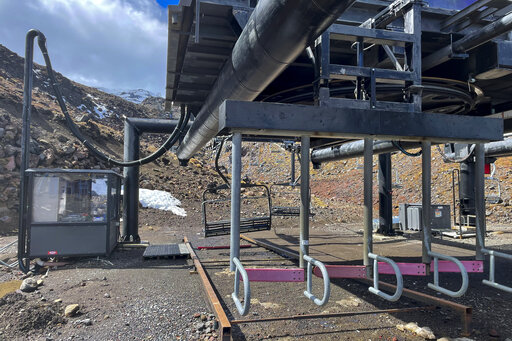 The ski slopes are almost devoid of snow at the Tūroa ski field at Mt. Ruapehu, New Zealand on Sept. 21, 2022. A disastrous snow season has left two of New Zealand's largest ski fields on the brink of bankruptcy, with climate change appearing to play a significant role. (AP Photo/Nick Perry) 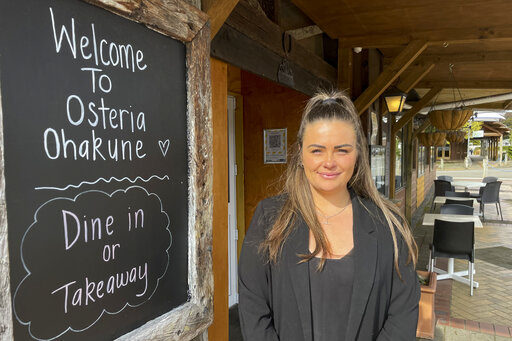 Teresa Mochan, restaurant manager and shareholder at the Osteria restaurant in Ohakune, New Zealand poses for a photo on Sept. 22, 2022. New Zealand's Turoa ski field is usually a white wonderland at this time of year, its deep snowpack supporting its famed spring skiing. But this season it remains a barren moonscape, with tiny patches of snow poking out between vast fields of jagged volcanic boulders. (AP Photo/Nick Perry)

Even in New Zealand’s cooler South Island, climate change is raising questions about the future of skiing and snowboarding. The sports have long been important for attracting foreign tourist dollars to New Zealand and form part of the nation’s identity as an outdoor adventure destination.

At Tūroa this season, workers in snow-grooming machines spent thousands of hours pushing what snow there was onto trails, allowing expert skiers and snowboarders to take the chairlifts to the top of the ski area for limited runs. But there was little on offer for beginners or intermediates.

Sam Yates, 21, this year landed his dream job as a ski instructor at Tūroa. But he estimates he managed to teach people on only about a dozen days between frequent mountain closures. On some days when Tūroa was closed, he was asked to pour coffees in the cafeteria at Whakapapa. In mid-August, he was one of about 135 workers — one-third of the staff at the two ski areas — who were laid off.

“It’s heartbreaking to see the weather,” Yates said. “You move down here and sacrifice six months of your life to commit to skiing. When you do that and then you can’t ski, it’s quite disheartening and yeah, heartbreaking.”

With the snow melting away and his job gone, Yates decided to pack up his van and move to South Island, where the skiing has been better. Then he hopes to follow the winter to Canada.

Johan Bergman, the ski area manager at Tūroa, said it had been a tough season.

“We’ve had some pretty decent snowfalls, but they’ve generally been followed by rain events, which has washed a lot of the snow away,” he said. “And it’s been a bit warm this winter, too, over the whole country, so we’re really lacking that snow this year.”

He looked behind him at the barren mountain.

“This should be white at the moment,” he said.

Bergman said that in his view, climate change is a background factor but this season has been more a case of bad luck. And he’s bullish on the sport’s future at Ruapehu.

“I always see skiing up here in the North Island of New Zealand,” he said.

But the poor season is putting severe financial pressure on Ruapehu Alpine Lifts, the company which owns both ski areas. Set up 70 years ago by ski enthusiasts, the company operates as a nonprofit. It’s exempt from paying company tax and is required to put any profits back into enhancing the ski areas.

But there are no profits. Last year the company lost nearly 6 million New Zealand dollars ($3.4 million) and its total debt climbed to over NZ$30 million. The company has been seeking a major new investor, so far without success.

Even before this year’s barren snow season, the company’s auditors noted there was significant doubt about whether the company could continue to stay afloat. Chief Executive Jono Dean this week did not immediately respond to written questions about the company’s future.

The company seems to have underestimated the threat posed by global warming. It doesn’t mention climate change once in its most recent 54-page annual report, instead listing the major threats to its business as further COVID-19 disruptions and borrowing restrictions.

The National Institute of Water and Atmospheric Research found New Zealand’s average winter temperature hit a new a record this year of almost 10 degrees Celsius (50 Fahrenheit). It was also the wettest winter on record. The agency concluded that climate change was a major contributor to both the extra warmth and the rain.

Professor James Renwick, a climate scientist at the Victoria University of Wellington, said that as temperatures increase in New Zealand, skiing will become more untenable.

He said there would always be changes from season to season but the trend was for warmer winters. He said it was hard to predict how long any individual ski area could survive.

“The further south you are and the higher up the mountains you are, the colder it is, so the longer you can keep going,” he said.

Some ski areas may even benefit, at least initially, from the extra precipitation driven by climate change if it’s cold enough to fall as snow, Renwick added.

Ski areas in some countries have increased revenues by opening their chairlifts to mountain bikers during the summer. But the ski areas on Mount Ruapehu can’t because they are in a national park and don’t have permission.

Mount Ruapehu is stunning, an active volcano that film director Peter Jackson used as a backdrop in “The Lord of the Rings” movies. The fertile volcanic soil at its base has allowed market gardening to flourish, including in the village of Ohakune, which is affectionately known as the nation’s carrot capital.

But Ohakune also relies on the ski business.

Phil Jackson, who built the Hobbit Motorlodge in Ohakune nearly 40 years ago, said this year has been the worst ski season since 1983, when the mountain was covered in ice. Normally he would ski at Tūroa, he said, but this year his only skiing has been four days in the South Island. And business at his motor lodge has been terrible.

“A shocker,” Jackson said. “Two years of COVID and now another disaster ski season. We’ll survive, but there will be people who won’t be able to survive.”

Others are hoping increased summer activity might make up for the skiing shortfall.

Ben Wiggins, the managing director of the TCB Ski, Board and Bike shop, said that while fewer people were coming to Ohakune for skiing and snowboarding, they’ve seen more visitors who want to go golfing, fishing, camping and mountain biking.

“The facilities down here like bars, cafes and restaurants are beautiful, and everybody loves the little town,” he said.

Nearby at the Osteria restaurant, manager Teresa Mochan said diner numbers were lower this year from pre-COVID levels but she was still busy because staff were hard to find.

“There are people that are a little bit down, I guess, because they haven’t been able to go skiing,” she said.

But Mochan said she loves living in Ohakune and plans to stay.

“Fingers crossed that next year we bounce back and have an amazing winter season and the town can really start to show its full potential again,” she said.