By DAVID McHUGH The Associated Press 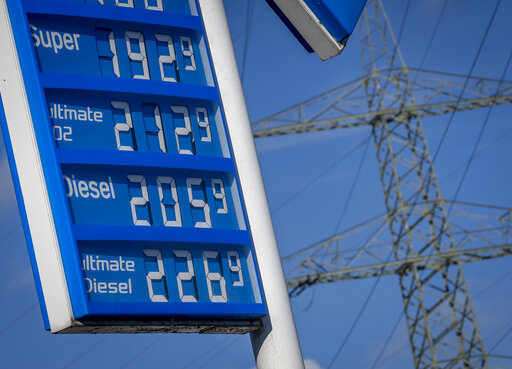 Gas prices are displayed at a gas station in Frankfurt, Germany, Wednesday, Oct. 5, 2022. A cut in oil production is on the table when OPEC oil-producing countries meet Wednesday. The OPEC+ alliance that includes Saudi Arabia and Russia is weighing a cut of a million barrels per day or more. The idea is to boost oil prices that have fallen from summer highs of over $100 to around $80 for U.S. crude. (AP Photo/Michael Probst)[ASSOCIATED PRESS/Michael Probst]

FRANKFURT, Germany (AP) — Major oil-producing countries led by Saudi Arabia and Russia have decided to slash the amount of oil they deliver to the global economy.

And the law of supply and demand suggests that can only mean one thing: higher prices are on the way for crude, and for the diesel fuel, gasoline and heating oil that are produced from oil.

The decision by the OPEC+ alliance to cut 2 million barrels a day starting next month comes as the Western allies are trying to cap the oil money flowing into Moscow’s war chest after it invaded Ukraine.

Here is what to know about the OPEC+ decision and what it could mean for the economy and the oil price cap:

WHY IS OPEC+ CUTTING PRODUCTION?

A subway passes by a gas station in Frankfurt, Germany, Wednesday, Oct. 5, 2022. A cut in oil production is on the table when OPEC oil-producing countries meet Wednesday. The OPEC+ alliance that includes Saudi Arabia and Russia is weighing a cut of a million barrels per day or more. The idea is to boost oil prices that have fallen from summer highs of over $100 to around $80 for U.S. crude. (AP Photo/Michael Probst)

Saudi Arabia’s Energy Minister Abdulaziz bin Salman says that the alliance is being proactive in adjusting supply ahead of a possible downturn in demand because a slowing global economy needs less fuel for travel and industry.

“We are going through a period of diverse uncertainties which could come our way, it’s a brewing cloud,” he said, and OPEC+ sought to remain “ahead of the curve.” He described the group’s role as “a moderating force, to bring about stability.”

Oil prices had fallen after a summer of highs. Now, after the OPEC+ decision, they are heading for their biggest weekly gain since March. Benchmark U.S. crude rose 3.2% on Friday, to $91.31 per barrel. Brent crude, the international standard, rose 2.8% to $97.09, though it’s still down 20% from mid-June, when it traded at over $123 per barrel.

One big reason for the slide is fears that large parts of the global economy are slipping into recession as high energy prices — for oil, natural gas and electricity — drive inflation and rob consumers of spending power.

Another reason: The summer highs came about because of fears that much of Russia’s oil production would be lost to the market over the war in Ukraine.

As Western traders shunned Russian oil even without sanctions, customers in India and China bought those barrels at a steep discount, so the hit to supply wasn’t as bad as expected.

Oil producers are wary of a sudden collapse in prices if the global economy goes downhill faster than expected. That’s what happened during the COVID-19 pandemic in 2020 and during the global financial crisis in 2008-2009.

HOW IS THE WEST TARGETING RUSSIAN OIL?

The U.S. and Britain imposed bans that were mostly symbolic because neither country imported much Russia oil. The White House held off pressing the European Union for an import ban because EU countries got a quarter of their oil from Russia.

In the end, the 27-nation bloc decided to cut off Russian oil that comes by ship on Dec. 5, while keeping a small amount of pipeline supplies that some Eastern European countries rely on.

Beyond that, the U.S. and other Group of Seven major democracies are working out the details on a price cap on Russian oil. It would target insurers and other service providers that facilitate oil shipments from Russia to other countries. The EU approved a measure along those lines this week.

Many of those providers are based in Europe and would be barred from dealing with Russian oil if the price is above the cap.

HOW WILL OIL CUTS, PRICE CAPS AND EMBARGOES CLASH?

The idea behind the price cap is to keep Russian oil flowing to the global market, just at lower prices. Russia, however, has threatened to simply stop deliveries to a country or companies that observe the cap. That could take more Russian oil off the market and push prices higher.

That could push costs at the pump higher, too.

U.S. gasoline prices that soared to record highs of $5.02 a gallon in mid-June had been falling recently, but they have been on the rise again, posing political problems for President Joe Biden a month before midterm elections.

Biden, facing inflation at near 40-year highs, had touted the falling pump prices. Over the past week, the national average price for a gallon rose 9 cents, to $3.87. That’s 65 cents more than Americans were paying a year ago.

“It’s a disappointment, and we’re looking at what alternatives we may have,” he told reporters about the OPEC+ decision.

Likely yes. Brent crude should reach $100 per barrel by December, says Jorge Leon, senior vice president at Rystad Energy. That is up from an earlier prediction of $89.

Part of the 2 million-barrel-per-day cut is only on paper as some OPEC+ countries aren’t able to produce their quota. So the group can deliver only about 1.2 million barrels a day in actual cuts.

That’s still going to have a “significant” effect on prices, Leon said.

That would exacerbate an energy crisis in Europe largely tied to Russian cutbacks of natural gas supplies used for heating, electricity and in factories and would send gasoline prices up worldwide. As that fuels inflation, people have less money to spend on other things like food and rent.

Other factors also could affect oil prices, including the depth of any possible recession in the U.S. or Europe and the duration of China’s COVID-19 restrictions, which have sapped demand for fuel.

WHAT WILL THIS MEAN FOR RUSSIA?

Analysts say that Russia, the biggest producer among the non-OPEC members in the alliance, would benefit from higher oil prices ahead of a price cap. If Russia has to sell oil at a discount, at least the reduction starts at a higher price level.

High oil prices earlier this year offset much of Russia’s sales lost from Western buyers avoiding its supply. The country also has managed to reroute some two-thirds of its typical Western sales to customers in places like India.

But then Moscow saw its take from oil slip from $21 billion in June to $19 billion in July to $17.7 billion in August as prices and sales volumes fell, according to the International Energy Agency. A third of Russia’s state budget comes from oil and gas revenue, so the price caps would further erode a key source of revenue.

Meanwhile, the rest of Russia’s economy is shrinking due to sanctions and the withdrawal of foreign businesses and investors.