By JILL LAWLESS The Associated Press 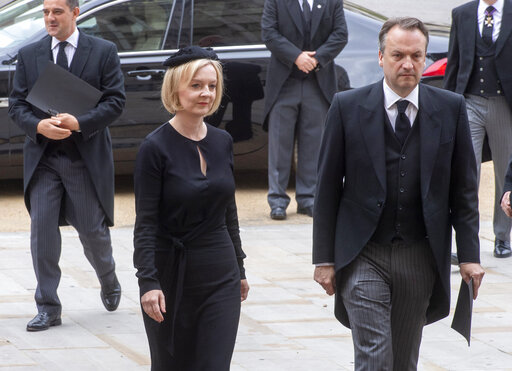 British Prime Minister Liz Truss and her husband Hugh O'Leary arrive for the funeral service of Queen Elizabeth II at Westminster Abbey in central London, Monday Sept. 19, 2022. The Queen, who died aged 96 on Sept. 8, will be buried at Windsor alongside her late husband, Prince Philip, who died last year. (Geoff Pugh/Pool via AP)[ASSOCIATED PRESS/Geoff Pugh]

NEW YORK (AP) — Prime Minister Liz Truss has kicked off her first visit to the United States as Britain’s leader with an admission that a U.K-U.S. free trade deal is not going to happen for years.

Truss said a trans-Atlantic deal is not one of her priorities — a sharp contrast with the stance of her immediate predecessors as Conservative prime minister, Boris Johnson and Theresa May. Both dangled the promise of a deal with the world’s biggest economy as one of the main prizes of Britain’s exit from the European Union.

“There (aren’t) currently any negotiations taking place with the U.S., and I don’t have an expectation that those are going to start in the short to medium term,” Truss told reporters aboard her plane to New York, where she landed Tuesday to attend the United Nations General Assembly.

Truss said she was more focused on obtaining accession to the Trans-Pacific trade partnership and striking trade deals with India and the Gulf Cooperation Council of states including Saudi Arabia and Qatar.

“Those are our trade priorities,” she said. 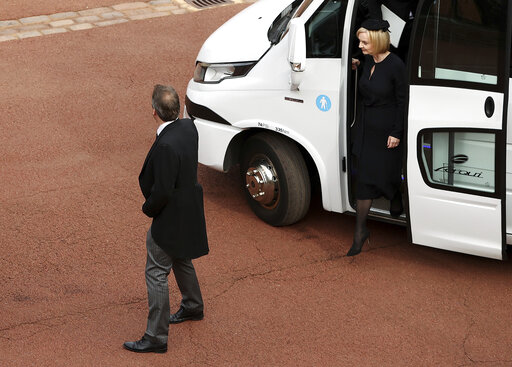 Britain's Prime Minister Liz Truss and her husband Hugh O'Leary arrive at Windsor Castle, Windsor, England, Monday Sept. 19, 2022, ahead of the committal service for Queen Elizabeth II. The Queen, who died aged 96 on Sept. 8, will be buried at Windsor alongside her late husband, Prince Philip, who died last year. (Ryan Pierse/Pool via AP) 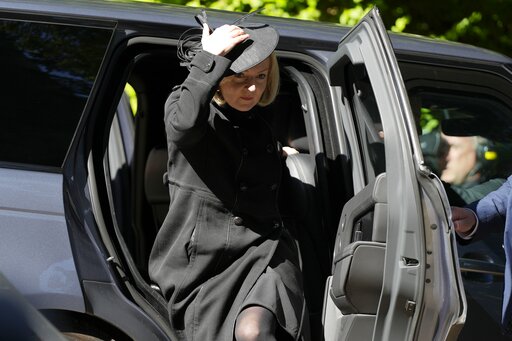 FILE - Britain's Prime Minister Liz Truss arrives at Llandaff Cathedral before the arrival of the King Charles III and the Queen Consort in Cardiff, Wales, Friday, Sept. 16, 2022. Britain’s prime minister flew to New York on Monday, Sept. 19, 2022, for the United Nations General Assembly, coming straight from the funeral of Queen Elizabeth II, whose death and commemoration have dominated the start of the new leader’s term. (AP Photo/Frank Augstein, Pool, File)

Truss’s downbeat assessment about trans-Atlantic trade came ahead of her first one-on-one meeting with President Joe Biden since she took office two weeks ago. The two leaders are due to meet Wednesday on the sidelines of the U.N. gathering in New York. Both were among scores of world leaders who attended the funeral of Queen Elizabeth II in London on Monday.

Truss said her priorities for the meeting with Biden were “making sure that we are able to collectively deal (with) Russian aggression,” and ensuring “we are not strategically dependent on authoritarian regimes.”

“I want to work with our allies like the United States, like France, the EU, the Baltic States, Poland to take on the challenge we face from Russian aggression,” she said. “That should be our priority.”

That puts the U.K. broadly in line with Biden’s tough stance toward Russia and China, but the trade impasse leaves the often-touted “special relationship” between Britain and the U.S. on the back burner.

Supporters of Brexit say one of the chief benefits of leaving the bloc, and its vast free market of almost half a billion people, is the chance for the United Kingdom to make new trade deals around the world.

U.K.-U.S. trade talks were launched with fanfare soon after Britain left the EU in 2020, but negotiations faltered amid rising concern in the U.S. administration about the impact of Brexit, especially on Northern Ireland.

Northern Ireland is the only part of the United Kingdom that shares a border with an EU member, and Brexit has brought new customs checks and paperwork for Northern Ireland trade, an issue that has spiraled into a political crisis for the power-sharing government in Belfast.

In response, Britain has announced plans to suspend the checks and rip up part of its Brexit treaty with the EU — a move that angered the bloc and alarmed Washington. Biden has warned that no side should do anything to undermine the 1998 Good Friday Agreement, the cornerstone of Northern Ireland’s peace process.

Truss says she wants to reach agreement with the EU, but will push ahead with rewriting the treaty if that fails. She has said the situation can’t be allowed to “drift.”

With hopes of a U.K.-U.S. agreement fading, Britain has resorted to signing trade deals with individual American states. So far it has inked agreements with Indiana and North Carolina.

Truss campaigned for Conservative leader on a promise to shake up Britain’s economy by cutting taxes, slashing regulation and attracting more investment to the U.K. But the start of her term has been dominated by the death and commemorations of Queen Elizabeth II, which put Truss’s political plans on hold during a 10-day period of national mourning.

The war in Ukraine will be topmost in Truss’s message when she makes her debut speech to the United Nations as British leader on Wednesday, urging more support for Kyiv and calling on nations to stop buying Russian oil and gas.

After the United States, the United Kingdom has been one of the biggest contributors of military and civilian aid to Ukraine. Truss wants to reassure allies that she’ll maintain the staunch support shown by Johnson. She will promise that in 2023 Britain will “match or exceed” the 2.3 billion pounds ($2.7 billion) in military aid given to Ukraine this year.