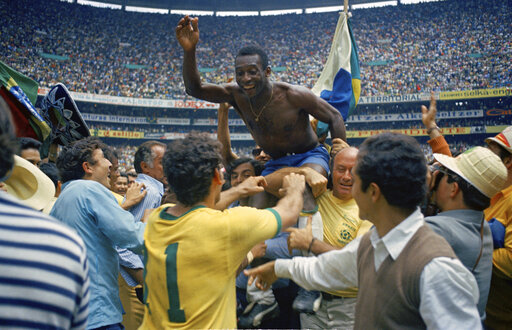 FILE - Brazil's Pele, center, is hoisted on the shoulders of his teammates after Brazil won the World Cup soccer final against Italy, 4-1, in Mexico City's Estadio Azteca, Mexico. Brazil's third World Cup triumph meant it kept the Jules Rimet trophy for good. The Hand of God. Zidane's headbutt. Gazza's tears. Many of soccer's most iconic moments have taken place at the World Cup, the latest edition of which starts in Qatar on Sunday. The Associated Press has covered the tournament through the years and followed the world's greatest players, none more so than Diego Maradona and Pelé.(AP Photo, file)[ASSOCIATED PRESS]

Many of soccer’s most iconic moments have taken place at the World Cup, the latest edition of which starts in Qatar on Sunday.

The Associated Press has covered the tournament through the years and followed the world’s greatest players, none more so than Diego Maradona and Pelé.

Maradona, the Argentina superstar who died in 2020, was a figure of controversy — look at the way he punched the ball in the goal for his team’s opener against England in the quarterfinals in 1986 — but also a magician with the ball at his feet.

Like his snaking run through England’s midfield and defense and then past goalkeeper Peter Shilton in the same game for perhaps the best World Cup goal.

FILE - An aerial view of the Centenario stadium in Montevideo, Uruguay, July 30, 1930 during the World Cup final soccer match in which Uruguay defeated Argentina 4-2. (AP Photo/File)

FILE - The Italian soccer team perform the fascist salute in Colombes Stadium, Paris, before the start of the World Cup final soccer match against Hungary on June 19, 1938. Earlier in the tournament that was taking place amid the drumbeat of war, the team caused consternation by wearing black shirts in a match. (AP Photo/File)

FILE - Italian forward Giorgio Ferrini, centre, is sent off by British referee Ken Aston after an incident during the first half of the World Cup soccer match against Chile in Santiago on June 2, 1962. Ferrini refused to leave the field and was removed by police officers. The match has been labelled the 'Battle of Santiago'. (AP Photo/File)

Pelé won the World Cup with Brazil for the first time as a lithe 17-year-old in 1958 and was 29 when he achieved the feat for a record third time in 1970. Fans lifted a grinning Pele onto their shoulders inside the Azteca Stadium in Mexico City.

How about those other much-talked about moments, like Zinedine Zidane, France’s graceful playmaker, headbutting Italy defender Marco Materazzi in the chest in the 2006 final. Or Geoff Hurst’s shot that bounced down off the underside of the crossbar and over the line — or was it? — in the 1966 final as England beat West Germany for its only World Cup title. Or Paul Gascoigne welling up after collecting a yellow card in the 1990 semifinals that would have ruled him out of the title match, had England reached it.

Then there are those famous goals in the final, by Germany’s Mario Götze in 2014, Spain’s Andres Iniesta in 2010, Brazil’s Ronaldo in 2002 and, much further back, Argentina’s Mario Kempes in 1978.

It’s all about getting your hands on the World Cup trophy. Just look at the joy on the faces of Maradona in 1986, Zidane in 1998 and Germany captain Franz Beckenbauer in 1974.