After days focused on Ukraine, other concerns emerge at UN

By SARAH DiLORENZO The Associated Press 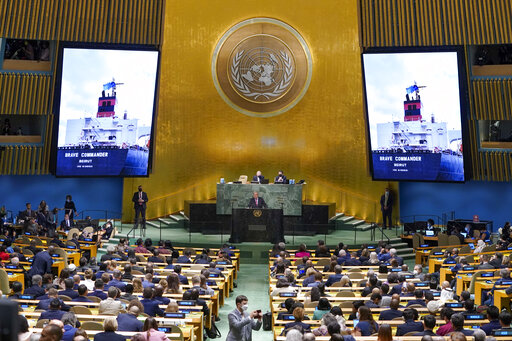 UNITED NATIONS (AP) — After three days in which the war in Ukraine consumed world leaders at the United Nations, other conflicts and concerns are beginning to emerge.

Some are long-simmering ones with global reach that have receded from the public’s attention recently. Israel’s prime minister called for the establishment of a Palestinian state in a speech Thursday that focused on that conflict. The Palestinian president speaks on Friday.

Others are regional conflicts that have flared. Armenia’s prime minister warned that “the risk of new aggression by Azerbaijan remains very high” after the largest outbreak of hostilities between the two adversaries in nearly two years. The ex-Soviet countries are locked in conflict over Nagorno-Karabakh, which is part of Azerbaijan but has been under the control of ethnic Armenian forces backed by Armenia since a separatist war there ended in 1994.

Leaders from Iraq and Pakistan, meanwhile, take the stage Friday. Both nations are pivotal to the geopolitical world order but have received less global attention in recent years.

The annual gathering of leaders at the U.N. General Assembly provides an opportunity for each country to air its concerns and express its hopes. This year’s meeting has thus far focused heavily on Russia’s invasion of Ukraine and the ensuing war, as countries have deplored how the conflict has upended the geopolitical order, repeatedly raised the specter of nuclear disaster and unleashed food and energy crises.

Russia and Ukraine faced off Thursday at a Security Council meeting — an extraordinary if brief encounter during which the top diplomats from nations at war were in the same room exchanging barbs and accusations, albeit not directly to each other.

At the meeting, the United States called on other nations to tell Russia to stop making nuclear threats and end “the horror” of its war. Moscow repeated its frequent claims that Kyiv has long oppressed Russian speakers in Ukraine’s east — one of the explanations Vladimir Putin’s government has offered for the invasion.

The Security Council meeting came a day after Ukrainian President Volodymyr Zelenskyy, speaking to the assembled leaders via video, insisted that his forces would win the war and demanded more robust U.N. action. The General Assembly gave Zelenskyy a pass from leaving his wartime nation so he could appear remotely — a decision Russia opposed.

Meanwhile, over in the assembly hall, Israeli Prime Minister Yair Lapid delivered a speech focused on the Palestinians.

The speech, ahead of Nov. 1 elections, appeared to be part of an effort by Lapid to portray himself — both to voters and global leaders — as a statesman and moderate alternative to his main rival, hardline former Prime Minister Benjamin Netanyahu.

“An agreement with the Palestinians, based on two states for two peoples, is the right thing for Israel’s security, for Israel’s economy and for the future of our children,” Lapid said.

But he was short on details, and there is virtually no chance Lapid, who has long supported a two-state solution, will get to push forward with his vision. Israel’s parliament is dominated by parties that oppose Palestinian independence, and opinion polls forecast a similar result after the upcoming elections.

The Palestinians seek the West Bank, east Jerusalem and the Gaza Strip — territories captured by Israel in 1967 — for an independent state, a position that enjoys wide international support.